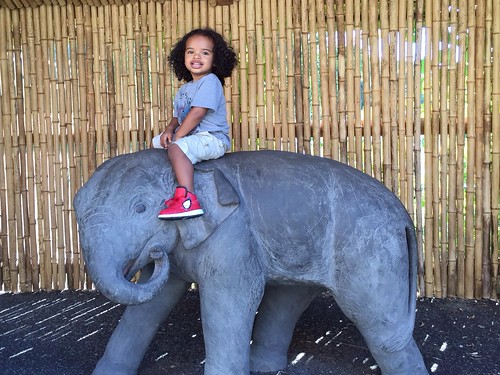 This morning Sean and Xavi came with me to Syracuse. While I attended my meeting they visited the zoo, which was on all the lists of toddler friendly things to do in the city. I knew that was the plan but it didn’t even cross my mind to object because I’d be missing a first. It just seemed like a great activity. Plus, they needed to do something while I was in my meeting.

I didn’t realize until we met up for lunch after the meeting and we talked about the visit that I’d missed Xavi’s first visit to the zoo. I didn’t get to see his face the first time he saw an elephant (he was more interested in some kids and their wagon) and monkeys. I wasn’t there to make him roar at the tiger and try to wake it up. And I wasn’t there to buy some totally cute toy or stuffed animal — that he does not need — in the gift shop.

But Sean was there and he took pictures and told me stories over lunch and the drive home. Xavi had a good time too, which is more important than me being right next to him. We’ll have more opportunities for fun outings.

I’ve always known I’d miss some firsts, but outings like this didn’t cross my mind because up until a few months ago Sean and I were both working outside the home. We both missed his first steps. His babysitter and grandparents witnessed it and took video. A few hours later Sean and I came home from our respective jobs to the gleeful news from my mother-in-law. She was really hoping Xavi would begin walking during her visit. You can imagine her excitement and pride.

This zoo thing, though? It’s like when you see mutual friends hanging out and it bugs you even though you know that’s dumb because even if you were invited you wouldn’t be able to go.

I shouldn’t have any FOMO (fear of missing out — don’t worry I’d never heard of this until one of the students I work with mentioned it) about my husband and son doing fun stuff together. I should just be thankful we can get by with our current family work arrangements and that I have an awesome husband and Xavi has an amazing dad who also makes beautiful pictures and funny videos so I can feel like I was there. 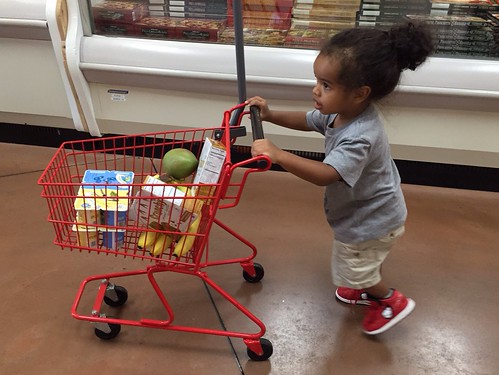 After lunch we visited the only Trader Joe’s in a 70 mile radius (*tear*). Xavi made a beeline for the mini shopping carts and immediately filled his with the bananas he picked out and my favorite cereal. He’s always fixated on other kids’ toy shopping carts so letting him push the real deal must’ve been exciting. At least I was there for that first and to make sure he didn’t knock down a display or run over anyone’s toes.