In 2018, one of my goals was to get more local. I wrote it down in my bullet journal and even drew a cute little waterfall to illustrate what I meant. At that point, I had been living in Ithaca for 2.5 years and still adjusting to the area. By being more local, I wanted to commit to my current home and community and not just long for LA. Instead of embracing winter and getting more involved at church, I went to LA four times. No regrets.

I looked back on this goal a few weeks ago when Sean and I took the kids to a local ski resort for their school’s ski and snowboard club. For a discounted rate, kids in K-12 schools can sign up for a six-week pass. They get two weeks of lessons and can ski one afternoon a week. I had never signed up Xavi because it’s in the middle of the week and working around our schedules was tough with two kids at different day cares/after school program sites. Also, I’ve never been skiing or snowboarding and had little knowledge of the mechanics.

Things have changed since fall 2018. Due to the pandemic, both Sean and I have a more flexible work schedule. Both kids attend the same school and after-school program. We have the funds to commit to a pricey activity. I’m more adjusted to the weather and enjoy playing in the snow with the kids. I don’t love winter, but can appreciate the breathtaking winter wonderland views.

In the fall the PTA sent out info on signing up. Sean and I talked it over to see if we could adjust our Wednesday afternoon schedules. We asked the kids if they were interested and which sport they’d prefer. They both chose skiing. I added ski club as an “experience” gift to the Christmas list we share with the grandparents and siblings. My brother Adrian and his wife, Alexis, pitched in. Then I covered my eyes as I paid and prayed they wouldn’t hate it because winter sports are not cheap. (Aside: I thought that by limiting toys as Christmas presents and focusing on experiences we’d be saving money. Joke’s on me!)

The kids are halfway through their ski club and both are getting the hang of the basics thanks to the patient and knowledgeable instructors. It’s been really cool to see them learn. I may even be inspired to sign-up for lessons myself. 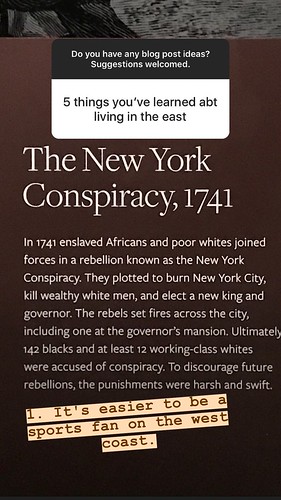 When I put out my call for blog topic suggestions, one to the topics suggested was five lessons I’ve learned living in the east. As someone born and raised in LA (county and city), I had more than five quick observations.

1. Winter is long and a 40 degree day is nice.
Northeast winters aren’t actually about three months. It’s cold from November to April. Fall and spring are nice albeit rather short. I honestly didn’t have difficulty adjusting to cold weather, I just found it difficult to adjust to the fact that I’d be experiencing it for 5-6 months. Also, my scale of what is cold and what is nice/not that bad has totally shifted.

2. It’s easier to be a sports fan on the west coast.
Time zones suck. I lost sleep during the playoffs and World Series because so many games went into extra innings. I love my Dodgers, but I also need sleep!

3. Northeast states are tiny and geography is funny.
And west coast states are BIG. From LA I could drive five hours north or west and still be in California. If I drive five hours from Ithaca I’ll be in one of a few different northeast states or even Canada. I still find it funny that the quickest route from Ithaca to my MIL’s house in Long Island takes us through Pennsylvania, New Jersey and back to New York.

4. There’s a lot of diversity within Latinx and black communities.
In LA my world was dominated by people like me: mestizo Mexicans and Central Americans, often 1st or 2nd generation immigrants. Although I knew it existed, I didn’t critically think about the racial diversity within the Latinx community. My time in Ithaca has coincided with more awareness thanks to people on social media and podcasts.  I’ve become a lot more aware of anti black and anti indigenous sentiment among Latinx people and more specifically Mexicans. In my work I’ve seen this diversity somewhat. There are students who identify as Latinx and can pass as white, others who strongly identify as Afro Latino, and some who are like me.

5. We are on indigenous land.
Well, duh. I’ve known this. I knew there were Tongva springs just a few miles from UCLA and was well aware of the many indigenous tribes in California. However, there’s something about being surrounded by names and reminders that in many ways center the original peoples of this land. The first street we lived on was named Seneca, Ithaca sits at the foot of Cayuga Lake, and when I drove in to Syracuse I saw signs for the Onodaga reservation. Seneca, Cayuga and Onodaga are part of the Haudenosaunee Confederacy (aka Iroquois Confederacy). In my role I’ve been around students and staff who begin meetings and other events with the reminder that the university is located in the traditional homelands of the Gayogohó:no (Cayuga Nation), one of the six Haudenosaunee nations. The other five nations are: Mohawk, Oneida, Onondaga, Seneca and Tuscarora.

6. Bonus: Racism doesn’t stop at the Mason-Dixon Line.
Ithaca is a very liberal college town. Despite this, I’ve seen confederate flags in the city and just outside in the surrounding counties. It’s a bit jarring to see a pickup truck drive through the main route through town flying a giant flag on an otherwise nice Sunday. In Sean’s job he also comes across people with hats, shirts, and sweaters featuring the confederate flag. Of course, I know racism isn’t limited to regions or symbols. But I never expected that the first time I saw one of these signs in the wild would be in New York. I was wrong!