Sunday: family leaves the LA apartment together and begins nomad life by staying with my parents in Hacienda Heights

Monday before sunrise: Sean and my dad begin the drive to Ithaca

Monday evening: I finish cleaning out our apartment and turn in the keys

Friday 1:00 am: Reunite with Sean and my dad in Syracuse

I was a jumble of nerves the last few days in California. First, I was nervous for Sean and my dad as they traveled a few thousand miles. They sent regular updates and photos of pretty sites in Utah and Colorado. Still I was worried as that is a lot of miles. Second, I was worried because Xavi was still a bit feverish and I didn’t now if we’d need to make a trip to urgent care part of our to-do before we fly out list. Luckily, baby Motrin helped and he was better by Tuesday. Third, I was nervous about trying to fit everything in our suitcases and backpacks. I realized as I cleaned out the apartment that we were too disorganized and should have made better use of the moving truck. Xavi and I really didn’t need all the clothes we hadn’t packed in boxes. Fourth, I was nervous about saying goodbye to Papá Chepe, my siblings and mom. It’s one thing to leave your able-bodied siblings and parents. I know I can call/Sykpe/FaceTime. I know they can visit. But it’s different with my 95-year old grandfather. Even before the stroke, the trip would’ve been rough for him. Plus, I knew that in recent weeks he’d been sad when my mom or siblings brought up our move. (Yes, I felt guilty.) Fifth, I was worried about the flights to New York. We’ve traveled to NY twice with Xavi. The first time was when he was 9 months old and not yet walking. The second time was in March. He was okay on both trips, but those were direct flights with two parents. Even if he was an angelic toddler, I’d still need to consider the logistics of lugging around our bags plus the bulky jogging stroller.

Last what if, for some reason, we arrived in Syracuse before Sean? Who would pick us up at the airport? 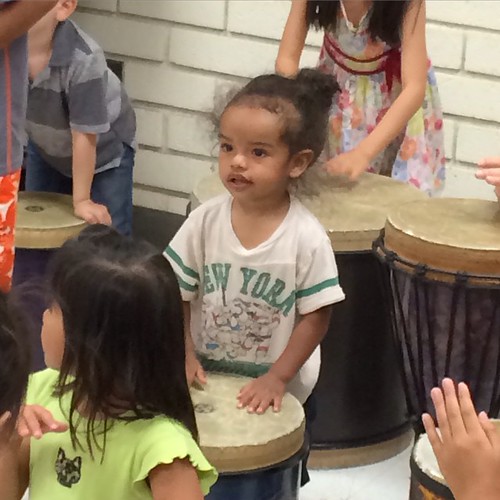 Rather than sit around feeling my stomach tie in to knots and as I freaked out, I kept busy with chores like laundry, eating my mom and aunts’ delicious food and finishing packing. Xavi played with all the toys his grandparents have spoiled with and splashed around in his kiddie pool to stay cool. We also went to the library for a kids’ program about drums of the world. Xavi wasn’t really in to it until he got to try out the drums like the other kids. 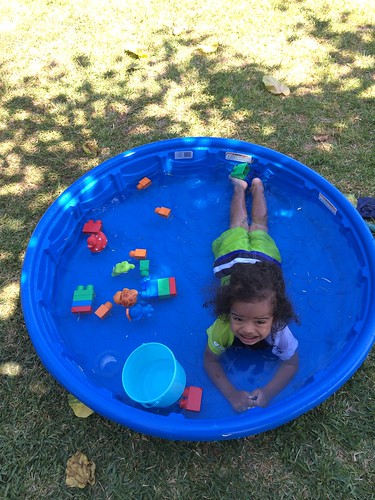 On Wednesday night, Danny cooked a gourmet meal for us. I was crabby, hungry and rather rude as Danny took a few hours to prepare everything (sorry, brother). I was annoyed because ordering out would’ve been just fine and less work for all involved. Now I’m thankful that he went through the trouble since it’ll be a while before I get one of his gourmet, professionally plated meals.

On Wednesday night I finished stuffing our suitcases. I decided we’d gate check the stroller which would help free up an arm and would check the roller bag I usually use as a carry on. I needed my hands free.

The next morning I tried to keep cool as I said my goodbyes to Papá Chepe, Lori and Adrian (he wore sunglasses to hide the dust getting in his eyes). Danny loaded up the Jeep and drove my mom, me and Xavi to LAX. I’m usually okay to be dropped off at the curb, but this time I needed them with me all the way up until we were separated at security. Plus, I just wanted to delay the goodbye and the inevitable tears. 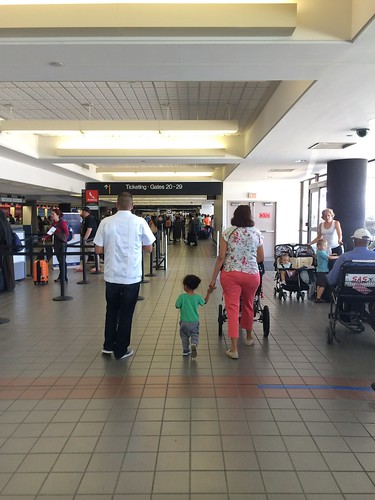 It was bittersweet. I missed Sean and wanted to see him again, but at the same time I knew that our move was tough on both my nuclear and extended family. We are super close both figuratively and literally. I felt the benefit of their nearness as we prepped for the move and I could count on them to come by to bring a meal, paint or entertain Xavi. My mom gave me and Xavi a blessing before we went through security and I choked back the tears. I needed to keep it together. 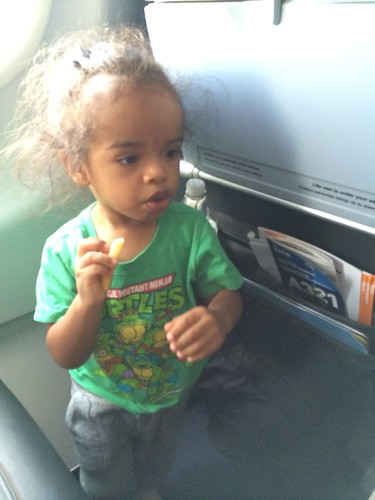 As soon as we got to our gate we took care of business (diaper change and getting lunch) and then it was time to board. Xavi and I were sitting in JetBlue’s Even More Space seats. They’re pricey, but well worth the extra space for a toddler who doesn’t want to sit still. Even though Xavi still qualified as a lap infant, I knew he needed his own seat just for the space (and not to bug our neighbor). He fell asleep for a little bit and then played calmly. He even got a compliment from the man who was sitting in our row. We arrived on time to JFK and then waited for our next flight to Syracuse. Our flight was delayed and the delay ultimately took longer than the actual flight. Xavi had a good time running around the seating area at the gate and up and down the concourse but got fussy when I made him stop. He needed to sleep and nodded off before our flight took off. 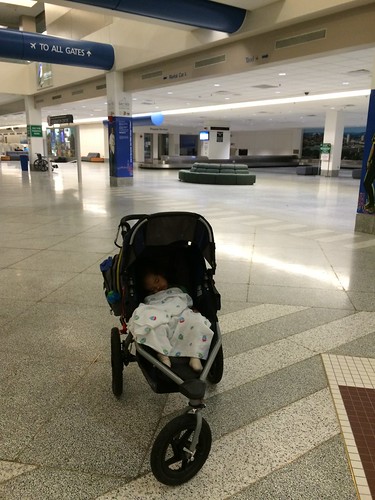 We arrived in Syracuse and met up with Sean and my dad. It was so good to see them. We were reunited and it felt so, so good.

Dad flew back to LA the next morning and then it was just me, Sean and Xavi hanging out in a hotel in Syracuse. On Sunday we drove south to Ithaca where we stayed in a new friend’s spare basement studio apartment. The next morning I started my new job.

We kept up the nomad/living out of a suitcase life for another week while we waited to move in to our new apartment (July 2nd) and have our things delivered by the moving company (July 4th).

A month later we’re pretty much moved in but still need to unpack some boxes of items we don’t use daily. I’ve settled in to my job and we’re getting to know our new town. More on that later.

3 thoughts on “What a trip”