I’d lived in apartment 3 on the 31st block of my street for many years before I called it “home.” I can’t tell you how many years it was. Maybe 7. Could’ve been 10. All I know is that it was well before Sean proposed in my bedroom (10+ years in) right next to the closet. It was before wedding supplies and gifts took over our living room (12 years in). And it was definitely before we brought home a tiny newborn Xavi from the hospital less than two miles away.

I do know that on the day I left it felt like home even though Sean wasn’t there and neither was Xavi.

We spent most of our last two weeks in a clutter of boxes, packing paper and stress. The Mosqueda side of the family came over to help pack, remove furniture we weren’t moving to Ithaca and watch Xavi. Meanwhile Sean worked out the logistics of driving cross country and we confirmed everything for our new apartment. As mentioned before, the movers picked up most of our belongings on June 18th. Our last day at work was the 19th. Over the weekend we rushed to finish packing up the items that would go in the car with Sean and my dad and would go in suitcases with me and Xavi. 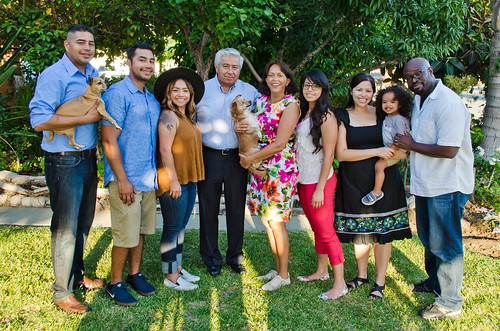 We left as a family for the last time on Sunday to attend the Father’s Day/Papá Chepe early 95th birthday party. Sean dropped me and a feverish Xavi off at my mom’s house (home for the next few days) and turned around to finish packing. He didn’t really get to enjoy the party, but we did have time for a big family photo.

But on the Monday I finished packing up the apartment, I felt like I was leaving home. I was by myself as Sean had left early that morning to begin the cross country drive. Xavi stayed at my mom’s house since he wouldn’t be much help cleaning up the apartment.

When I returned to the almost empty apartment I found Sean had left me a note written with Scrabble cards. It read, “I love you Cindy.” I left the cards there while I cleaned out everything we had left for the last minute. Soon a family friend and his kids came to pick up the refrigerator and the kitchen table. Other friends stopped by for wine (still leftover from our wedding, a bookshelf or just to say hi). 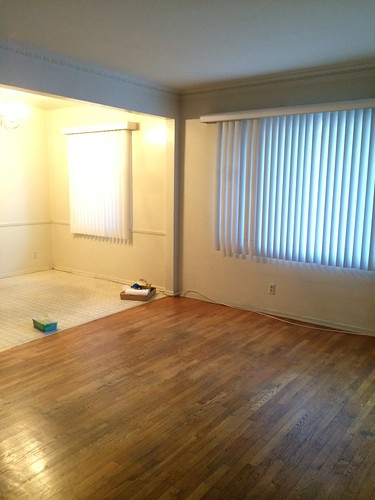 I took a break to eat and go to my neighborhood Trader Joe’s (for the last time — the nearest one is an hour away) for a snack and some plants/flowers for the neighbors I’d miss the most and Xavi’s former babysitter. In the many years I lived in the building, there were only three neighbors who lived there longer than me. They all became friendly especially after Xavi was born. The lady upstairs was especially sweet. I swept through the apartment one more time making sure I didn’t forget anything [I did, I left the comal sitting in it’s usual spot on the stove], locked up and then turned in the keys. 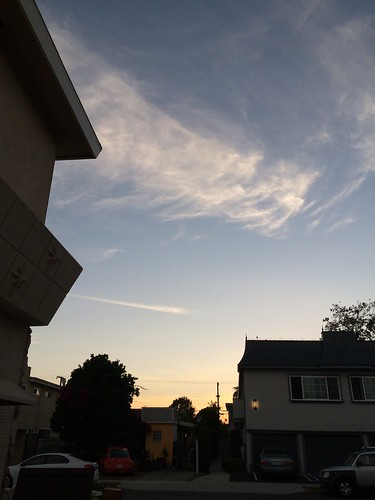 I took pictures after loading up the last things in my dad’s Jeep. It was nice to see the sun setting in a lovely way and reminding me of how it would look on those summer evenings when I would go for a run or Sean and Xavi would walk out to meet me at the bus stop.

I managed not to cry as I left my LA apartment, but I sure felt like it. I knew I probably wouldn’t be going back there, even if I keep in touch with some of our neighbors. When I go back to LA, I’ll be visiting family or friends who mainly live 20-40 minutes away from my old neighborhood. 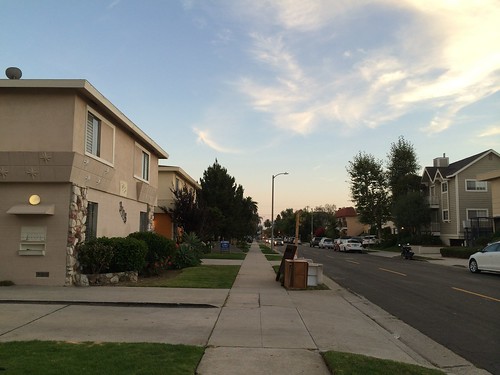 I think the best way to write a tribute to my first/only apartment is a by the numbers:

1 marriage proposal
2 former residents who were teachers (1 became a teacher after living there)
3 days, Xavi’s age when he came home from the hospital
4 original inhabitants, aka the Roomies (all still good friends I saw either shortly before moving or earlier in the spring)
5 years the longest roommate (besides me) stayed
6 the number of neighbor kids who regularly played in the driveway
7 former roommates I got along with
8 total former roommates
9 races I trained for by starting my run down this street;
10 minute walk to Downtown Culver City for a movie or a beer
15 (well 14.8) years living there
249 the difference between the original and final rent