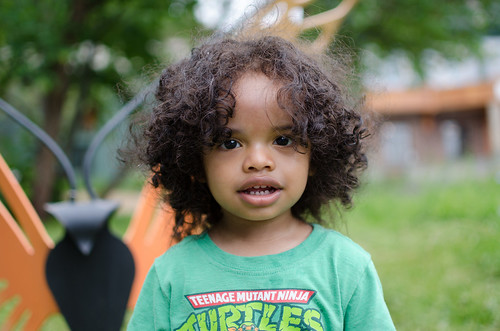 Xavi is two years old*. That feels weird yet natural to write. It’s not the time that’s passed, but the way we measure it. We’re no longer saying his age in months when people ask.

My son has changed a lot since we first met him that sunny Thursday afternoon. He’s no longer the tiny newborn who nurses frequently and is swaddled to sleep. He’s a bright and silly toddler who says a lot without using many words. He’s obsessed with trains and freaks out when the train rolls by a block away.

And while he is bigger and more active, there is so much that doesn’t change. I still want to cuddle him even if he can wriggle free in two seconds flat. I stare at him while he sleeps amazed that Sean and I made such a beautiful creature. I still send poop emoji because dirty diapers are still an event. His hair still gets him lots of attention and comments and his smile and giggle are the best sounds ever. And he still loves my singing and listening to stories. 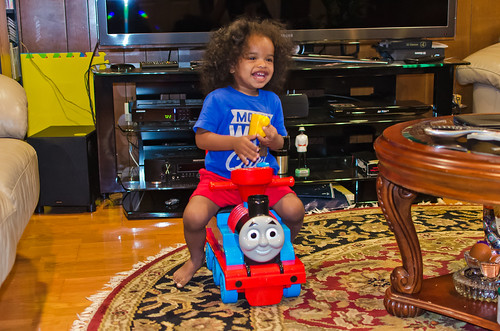 We spent Xavi’s birthday at my in-laws’ house in Long Island. From a two-year-old’s standpoint, it might’ve been the best day ever as it was filled with his favorites and he was spoiled by 1.5 sets of grandparents (my mom was in town).

The word has spread that he’s a bit obsessed with Thomas and Friends and trains in general. My mother-in-law bought him a train he can ride on as well as an iPad. Xavi now officially has the newest iPad in the family. The big train and smaller trains joined Xavi’s collection of Thomases (Thomi?) that my mom helped grow by bringing some of the magnetic trains he left behind in LA and buying him new trains. 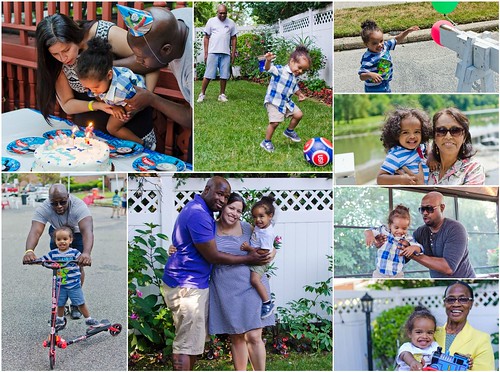 After exploring the stairs at grandma’s we walked down the street for a block party. It was the perfect weather a neighborhood block party. Xavi had a good time trying to stay upright in the bouncy house and playing with water, two more favorites. I was a little squeamish about seeing him play with a water gun, but he’d rather just pour out water from a cup and splash water.

He also had a small birthday party. It was a low key affair compared to his first birthday bash. Eula invited over some friends from the neighborhood and church. She cooked up a bunch of delicious food and we played in the backyard and tried not to get eaten alive by mosquitoes. Xavi played bubbles and soccer with his grandpa. I don’t think he’s ready either for El Tri or the Reggae Boyz squads, but if there was a selección nacional team for chasing and popping bubbles Xavi would surely make the team.

And last there was cake! Who doesn’t love cake. 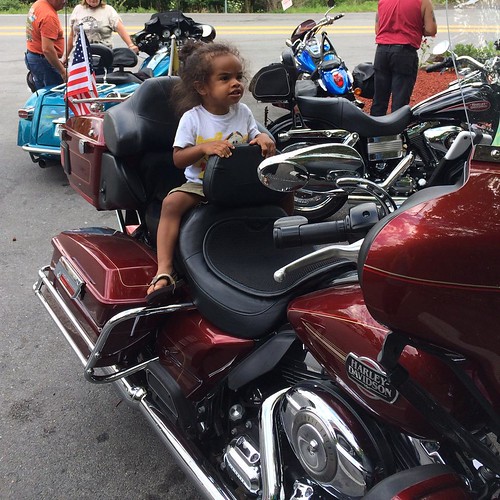 We returned to Ithaca on Sunday. Xavi had one last awesome experience. He got to sit on a Harley-Davidson motorcycle during a rest stop. The very kind bikers kept calling him a little girl — he gets that a lot thanks to the long hair — but the only thing that bothered him was when I took him away.

*And a couple of weeks. I’m a little late in posting this.

2 thoughts on “Xavi is two”