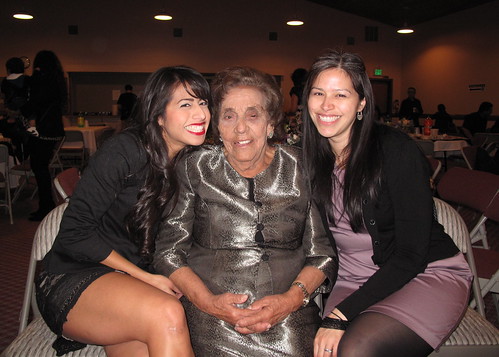 I heard a car idling outside at 4 am. Who idles at 4 am? I wondered. Was it my dad? No it couldn’t be. It was way too early even for my dad. I didn’t even bother looking at my phone. After a couple of minutes Sean stirred and eventually went to the door. It was my dad.

He was an hour early for his 5 am appointment. Two days before I had arranged for dad to give Sean a ride to the airport. On Tuesday morning Sean learned that his close friend of 12 years, Kevin, passed away suddenly. Sean booked a flight to NY to attend the services. Although I got to know Kevin too, I opted to stay home due to the expense. I enlisted my dad for a ride to the airport to save money on a cab or shuttle.

Sean got dressed and ready. He came back in to the room and said, “Your dad wants to talk to you.”

I walked slowly out to the living room and saw dad in the dark. He gave me a hug.

“Mija, I wanted to tell you. Mamá Toni is now in heaven. It just happened right now. At 3:05.” He drew me in closer. “She went away very peacefully. We were monitoring her.”

Oh. This was the second time in 48 hours I had been informed of a death after just waking up. Kevin was 36, his death was sudden and unexpected. Mamá Toni was 92 and for the past 8 months or so we knew she was quite ill. On Sunday when I saw her last, she stayed in bed all day and woke intermittently to greet the many family visitors who stopped by. We knew her death was imminent and the team of family nurses and caretakers (dad, mom, aunts, uncles and cousins) were working diligently to make sure she was as comfortable as possible.

“I wanted to tell you now, in case you want to come back with me after I take Sean. She’s still there, we haven’t called the nurse and mortuary yet.”

I had already planned to take Xavi to spend a day or two at my mom’s while Sean was in New York. There’s more space for him to run around plus I could get a little help when I needed it. And there’s the bonus that he cheers up Papá Chepe and everyone else.

Dad seemed to read my mind.

I told dad we’d get ready and go back to Hacienda Heights with him. I wanted to let Xavi sleep a little longer. Sean hugged me tight and offered to cancel his trip but I told him no, he should go to Kevin’s funeral and see his friends. We would be okay and I wouldn’t be alone. I did ask him to pack up some things for Xavi.

Once dad and Sean left, I couldn’t go back to sleep. I lay with Xavi at my side going through all my Flickr photos tagged “mamatoni.”. There are over 200. Most are from the past 10 years when I first got a digital camera. 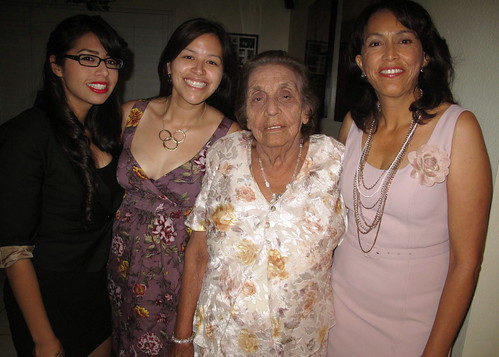 There are dozens at the January anniversary parties, birthdays, and holidays. 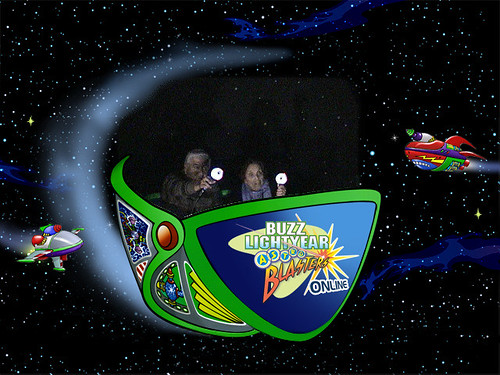 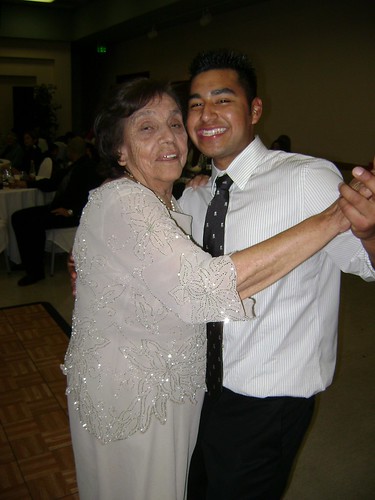 And then there are the oddball ones of her riding Buzz Lightyear Astroblasters at Disneyland or Adrian dancing kinda crazy with her. (That one isn’t goofy, but I love their expressions.) 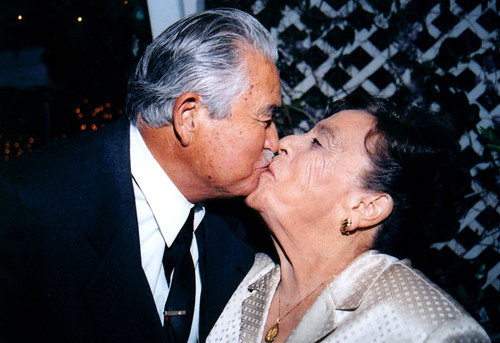 And there are the heart melting ones of her kissing Papá Chepe or holding a newborn Xavi. 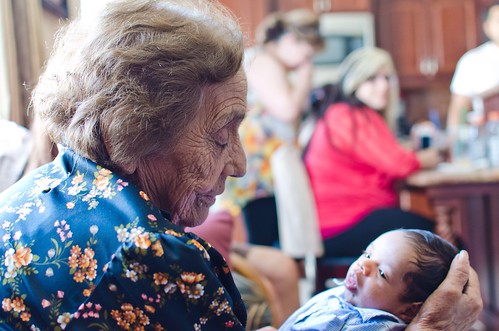 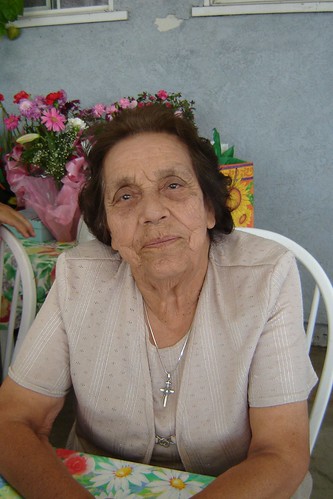 My favorite is the one above, which I titled “matriarch” from Mother’s Day 2006. Her face is fuller, her hair shows no grays (she still insisted on dying), she’s in tan rather than her signature lavender. I love her “let me tell you” expression. And mainly, I like that she’s somewhat smiling. It wasn’t easy to get a photo of Mamá Toni smiling.

When dad returned I got ready. I drove my car and he followed behind. Xavi woke up in the transition from bed to car seat. I sang to him on the way to HH. “You Got A Friend In Me” was tough. I cried for Mamá Toni and Papá Chepe and for Kevin and Sean.

We got home to find several cars and aunts and uncles sitting soberly having coffee and donuts. The door to Papá Chepe and Mamá Toni’s room was closed.

When my aunts opened it, they told me they had just told Papá Chepe. I went in to the room. He was being consoled by my mom and her sisters.

Mamá Toni was in her bed at the other end of the room. I touched her head and gave her a kiss. She felt cool but just looked like she was peacefully sleeping.

Papá Chepe was crying in a low wail. Really, I think the word “llanto” is more fitting. Llanto implies utter heartbreak and loss. And that’s what I imagine he feels after losing his wife and partner of 71+ years.

Someone asked if he wanted to see Mamá Toni, to touch her. He nodded yes and soon their two beds were side by side. Mamá Toni was on Papá Chepe’s left side, the side he can still move freely. He held her hand.

“We are here for you, your family is here and will continue being here,” my mom told Papá Chepe.

Over the rest of the morning more family members arrived. The funeral director and his assistant came a little after 9 to take Mamá Toni. And we paused to say the first of our goodbyes over the next week 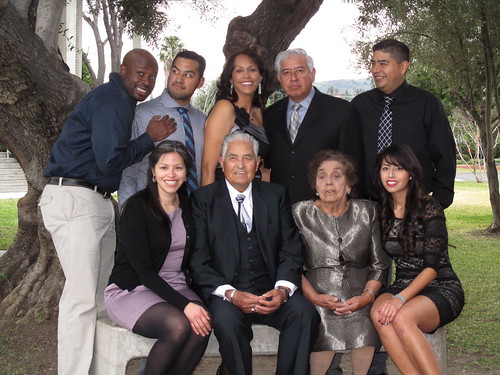 I’ve been at my parents’ house since Thursday morning. Family members and friends have come to offer condolences and others are busy planning the services for next Wednesday and Thursday.

It’s nice to be around my immediate and extended family at this time if only for the distraction. The house is far from being lonely, but Mamá Toni’s absence is impossible to miss. 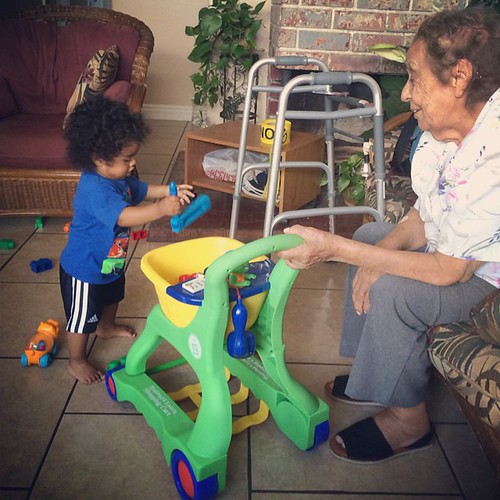 I don’t think that feeling will go away anytime soon. Mamá Toni and Papá Chepe have been part of my home since I was 9 years old and they were always part of family gatherings. It’s tough to think of home without Mamá Toni.

I’ve written about both my grandparents many times over the past 13 years of blogging. I know some of you will feel like you know Papá Chepe and Mamá Toni too. Or maybe you met them at some point.

Thank you for those who have prayed for my grandparents in these recent tough times. I deeply appreciate it. Please continue to keep us in your thoughts, especially Papá Chepe.

2 thoughts on “Mamá Toni, the matriarch”