On the morning Mamá Toni passed away, I sat across the kitchen table from tío Beto. Oddly enough, food came to mind. Not just any food, Mamá Toni’s famous red chile pork tamales.

“Now who’s going to make you your tamales,” I asked my uncle, the eldest — and some might say favorite — of Mamá Toni’s sons.

He gave me a half smile and thumbed the folded up napkin in his hand.

“Pues, Chilo,” his big sister, my madrina (godmother) and the eldest of the Ureño Saldivar children.

By default, the little things Mamá Toni had done to take care of her son had been passed on to Madrina Chilo. Her tamales were just as delicious. She used the same unwritten recipe as Mamá Toni. 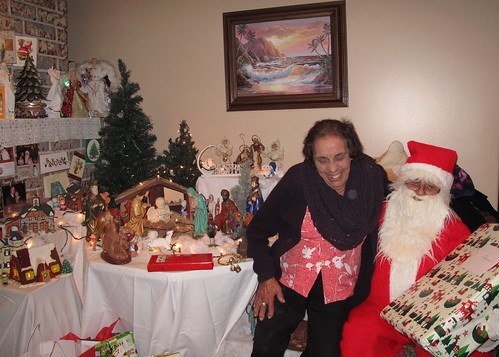 Christmas in my family means tamaladas held a few days before Christmas Eve to prepare dozens of tamales. I used to help. As a kid, my job was to painstakingly remove the cornsilk from the cornhusks soaking in a tub of water. Inside, the women of the family would laugh and gossip while spreading the hojas with masa. Mamá Toni was in charge of spooning in the guiso, a stew-like red chile and pork filling. She also did the folding. Later, I’d get to join the crew with spreading the masa, but never doing any of the final steps. That was for the pros.

In recent years, Mamá Toni took more of a supervisory role in the tamaladas. Madrina Chilo was in charge. I tended to miss them thanks to work and school on the other side of town.

Nevertheless, I had no shame in partaking of the benefits. I ate my share of tamales, and then some. They were delicious and perfect in every way. The right size, the difficult balance of spiciness to add a kick without making you cry (important for a chile weakling like me), neither too try nor so moist that it crumbles as soon as unwrapped, and never stingy with the amount of meat in each individual tamal. They were best the next morning, heated up to a crisp on the comal.

I took those tamales for granted, but Sean didn’t. He had never eaten tamales before moving out to California and dating me. He loved Mamá Toni’s tamales and would gladly take leftovers of the pork. The compliments filled her with pride and she got a kick that he really liked Mexican food. 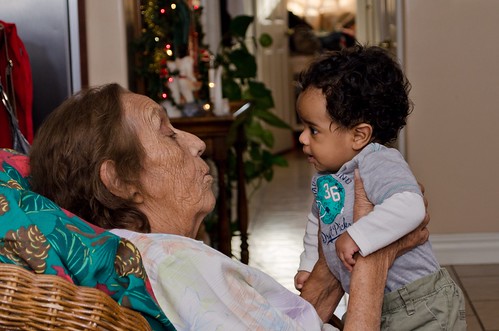 I caught myself thinking that Mamá Toni would be at the tamalada this year. It’ll be the first Christmas without her. I don’t know if I’m ready for that. 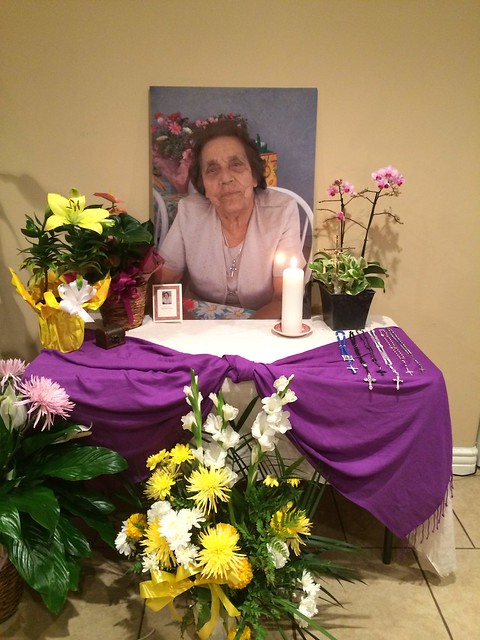 The day of Mamá Toni’s funeral everyone in the family wore purple, her favorite color. The pall bearers — the eldest sons of each family — wore the same eggplant shade. Everyone else wore something between lavender and violet. Xavi wore purple too. And I pulled out all the purple dresses in my closet that no longer fit me and lent them to my cousins and sister. Three people wore my dresses. I like purple a lot too.

There were flowers, lots and lots of flowers. I wondered, who will take care of these arrangements and make sure they last for days. Mamá Toni was a pro at keeping flower arrangements looking fresh longer than anyone I knew.

The Mass was celebrated by Mamá Toni’s Fr. Roberto. He’s currently assigned to a parish in Seattle, but fortunately he was able to be in town for the services as it coincided with a conference. As Mamá Toni’s nephew and godson, Padre Roberto added a very personal touch to his sermon. I don’t think anyone could suppress the tears when he spoke about how much good Mamá Toni did throughout her life, almost all in partnership with Papá Chepe. I wasn’t around at the time, but in the ’60s and ’70s, Mamá Toni helped her brother Mateo (Roberto’s father) emigrate. Her home in East LA was a temporary residence for many family members and friends immigrating. Most of my family is very removed from the immigrant experience either having never experiencing it or it being decades in the past. Fr. Roberto’s sermon was a nice reminder of how much Mamá Toni had done for her siblings and their families. After the burial and reception I told dad, “Your eulogy at the rosary was very nice, but Fr. Roberto’s was amazing. I know it’s not a competition.”

At the burial, I stood in the shade out of the hot sun next to dad, Lori and Danny. We reprised our Mosqueda mini-tradition of singing at the funerals of our loved ones. We did it for tío Joe, tío Johnny, our neighbor Dale and now Mamá Toni. My aunts, uncles and cousins let go of doves while we sang and others placed flowers on the casket. Later, dad would tell me likes singing and playing guitar during the funeral services because it keeps him busy and focused on the task rather than the grief. I know what he means because I do it too, but I also sing because it’s another way of showing my love, saying “goodbye” and finding comfort with my family as we sing together.

Following the burial, most of the family went back to the church hall for a reception. Sean and I went to my parents’ to allow Xavi to nap. Tía Josie and my cousin Patty were already there taking care of Papá Chepe. Later that evening more family came over to begin the novena. The final rosary on November 7th would be even more crowded with family and friends joining to pray for Mamá Toni’s soul.

(I’m kicking myself now for not writing more about the services two months ago when they were fresher in my mind. The words were really beautiful.)

It’s been two months. It really doesn’t feel that long.