Early in the year I zipped through a couple of books a week. By March I was way ahead of my overall goal for the year (75) and thought I might even get to 100. Then I discovered a jigsaw puzzle app which was quite relaxing but cut in to reading time unless I was listening to an audiobook. Then I found out I got a new job and we started the moving process. Rather than read in the evening I was looking for a place to live, packing and all that fun stuff.

That’s all to say I’m really slowing down, but still making decent progress toward my goal.

Anyway, on to the mini reviews.

The Thousand-Dollar Tan Line by Rob Thomas and Jennifer Graham

I was a huge fan of the Veronica Mars TV series. I’m bummed we only got a few seasons before the series was cancelled. You can imagine my excitement when I saw someone mention the Veronica Mars book as one they were reading to fulfill a challenge (book basked on or turned in to a TV show). I downloaded the audiobook narrated by Kristen Bell and loved it. It picks up where the movie leaves off and takes us back to solve the case of some young women who go missing in Neptune during spring break.
Crazy Rich Asians by Kevin Kwan

I listened to the audiobook for this outlandish story of a Singaporean family and the wealth that I can’t even begin to imagine. The plot centers around Rachel Chu and her boyfriend, Nick Young, two professors living in New York. Rachel knows little about Nick’s family and doesn’t come to find out that he’s part of a secretive old money family in Singapore.

The story is fun even if it’s tough trying to remember who is who in the Young-T’Sien-Cheng family trees. I listened to the audiobook so I didn’t see the family tree until much later.

It’s easy to see why Jacqueline Woodson’s Brown Girl Dreaming has earned her so much praise and earned her the 2014 National Book Award. The book is written in autobiographical short poems that all can stand on their own but go well together. It reminded me of The House on Mango Street in that sense. We follow young Jacqueline as her family moves from the South Carolina in a segregated part of town to Brooklyn. The poems are about things like her little brother getting lead poisoning, enjoying summer days in South Carolina and going to Jehova’s Witnesses church services. My only complaint is that I feel the book ended too soon, when Jacqueline is entering her teen years and both the South and North are feeling the affect of the Civil Rights Movement.

Billy Lynn is an excellent satirical novel following some heroes from the early days of the war in Iraq. Bravo Squad is home for a “Victory Tour”. Most of the action occurs in one day as the men attend a Thanksgiving Day game at Cowboy Stadium in Dallas. While they’re simultaneously treated like heroes, they also know that soon they’ll be sent back to Iraq. It’s billed as the Catch 22 of the Iraq War, but I think it’s much funnier. Granted, I don’t think I finished reading Catch 22.

Dad Is Fat by Jim Gaffigan

I’ve heard parts of Jim Gaffigan’s stand up about being a father. Thus, some sections were repetitive. However, I overall really enjoyed it as someone who currently has a small child. I listened to the audiobook, narrated by Gaffigan.

Bad Feminist by Roxane Gay
I’m ashamed to admit that Roxane Gay wasn’t really on my social media radar before I started seeing her 2014 books, An Untamed State and Bad Feminist on my radar. Nevertheless, I’m glad I’ve read both her recent fiction and nonfiction. My favorite essays tended to be about pop culture (Sweet Valley High series) and the intersection with issues of race and class. Gay also made me think twice about unlikable main characters and why likability shouldn’t really matter in literature.

The Buried Giant by Kazuo Ishiguro

Kazuo Ishiguro tackles loss in a new way through The Buried Giant set in the England of King Arthur’s time. While I enjoyed the book overall, it was a little bit of a slog. I actually liked it more after hearing the Ishiguro on the Bookworm podcast where he discussed his motivations for writing the novel. I had that “aha, now I see what you were doing there” moment I was too dense to figure out earlier.

I didn’t anything about The First Bad Man before reading it, I just expected it to be odd and a bit funny like other Miranda July stories. I liked where the novel went and how it made me think about my own identity shifting in recent years as I became a mother.

A Wrinkle In Time by Madeleine L’Engle

I never read A Wrinkle In Time as a kid and it was on the list of must reads for 9-14 year-olds. I liked it, but it overall felt too short. Not sure I want to read the whole series.

I’m glad I gave Lianne Moriarty another try after What Alice Forgot which I complained was too long and trying to do too much, even if the premise was interesting. Big Little Lies takes us back to the suburbs of Sydney and focuses on the lives of three women whose children attend the same school. Madeline is aggressive and likes to start fights. She’s fiercely loyal to her best friend, Celeste, and takes Jane, a new, young single mom, under her wing. Everything gets pretty dramatic rather quickly. Considering that it’s about murder and domestic violence, the book is actually rather entertaining.

THREE STAR BOOKS (and one 2) 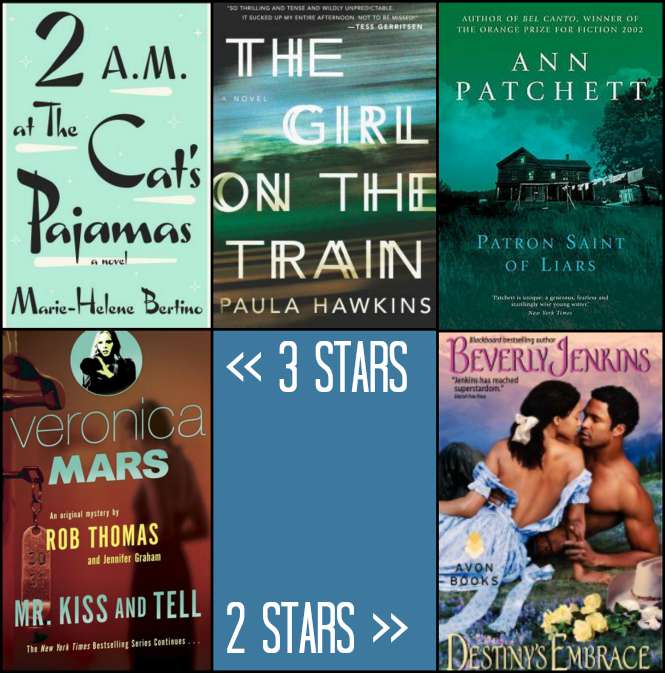 All the action in 2 A.M. at the Cat’s Pajamas occurs on December 23rd, Christmas Eve Eve. I liked it, but should have probably read the book. There are a number of characters and plots to follow that all come together without feeling forced. Madeleine is a little girl who recently lost her mother to cancer. The neighbors and local business owners look out for her as her father seems too grief stricken to really parent. She has trouble at her Catholic school where her teacher, Sarina Greene, takes pity on her. Then there’s the owner of the club, Lorca, and his group of musicians and family. Overall, it’s an enjoyable story but I was thrown off by the magical realism elements.

The Girl on the Train by Paula Hawkins

It’s easy to see why The Girl on the Train is on bestseller lists. Read it if you really liked Gone Girl and psychological thrillers with unreliable narrators and characters you find it tough to cheer for.

Mr. Kiss and Tell by Rob Thomas and Jennifer Graham

Mr. Kiss and Tell is the second book in the Veronica Mars series. Veronica is hired once again by the owner of the Neptune Grand to find out if the woman who said she was raped by an employee of the hotel is actually telling the truth. Veronica quickly finds that this isn’t just about the rape of one young woman and uncovers a bigger crime. I think I would’ve liked this more if Kristen Bell narrated the audiobook once again.

I really liked the other recent books I’ve read by Ann Patchett, but didn’t love The Patron Saint of Liars. I’ve a read a few books recently about reluctant and absent mothers. Rose Clinton isn’t absent, but she’s definitely got a complicated relationship. The novels begins when she simply drives away from San Diego where she lived with her husband. All she leaves is a note. She goes to St. Elizabeth’s, a home for unwed mothers run by nuns, in a small Kentucky town. While the other women leave St. Elizabeth’s after having their children and giving them up for adoption, Rose stays and continues to work as the cook.

I needed to read a romance novel for the Book Riot Read Harder challenge. I picked a book that featured protagonists of color. As a plus, it’s set in 1800s California. Mariah Cooper is a young seamstress living with her mom in an east coast city (Philadelphia? I can’t remember). She answers and add asking for a housekeeper placed by the widowed mistress of a ranch in northern California. She quickly gets to work and clashes with Logan Yates, her new boss who also happens to be a very handsome and eligible bachelor. It was okay, but I’m not intrigued enough to read the rest of the books in the series.