Most new mom bloggers I read — at least those focused on fitness and running — seem to write the “body after baby” post almost as soon as they have the baby. I waited a while.

I wrote the following when I was 39/40 weeks pregnant.

“Are you sure your due date is in a month?”

“Are you sure you’re not having twins in there?”

I haven’t heard any of these comments, I’ve just read about them on blogs, message boards, and Facebook groups. Instead, I’ve heard comments from family, co-workers, nurses and others that I don’t look like I’m that far along or that I look small. One nurse asked if I was gaining enough weight. Family members commented on my lack of a large bump. My cousin Nancy even accused me of exaggerating it — she was half right. Although my doctor was never concerned about my weight gain or Meatball’s size, those comments made me wonder if he was growing okay.

Honestly, I felt a little left out since it took a while for me to even get the occasional “Are you pregnant?/When are you due?” question from a stranger. In this case, the person was not a stranger, but a student I worked with. While my co-workers all knew early in the second trimester, I never actually told the 4 work-study students in our office or the dozens of students I coordinate in research programs. That just would be weird. In mid-May (30 weeks along), I got my first “are you expecting?” question. I was happy because finally I was starting to look pregnant rather than as if I’d just gained weight. When I told Sean, he replied, “Ah, youth. They haven’t learned to avoid that question at all costs.” I replied that I didn’t mind, plus the student got a pass because he’s in nursing and has done a nursing round in labor and delivery at a local hospital. One of our work-study students didn’t even know I was pregnant until June probably because I’m usually sitting at a desk.

The only other time I’ve received much attention about my body and weight gain/loss was four years ago when I was in the process of losing 60 pounds. In both cases, the comments about the changes came from friends, family, and co-workers. During weight loss there were more comments that made me feel uncomfortable and self conscious. Sure, I liked that my efforts were noticed, but for me there was a “right” way and time to acknowledge the differences. The same goes for pregnancy. I’ve been lucky that I work and am surrounded by people who are (a) just very sweet or (b) know what not to say.

I know that was a bit smug and humble-braggy, probably why I never felt it was ready to publish. And then Xavi was born and writing wasn’t a priority.

Now 4.5 months postpartum this has come back. I remember reading another mom blogger’s update about her newborn son’s 2nd week. At the end of it she made a comment about already being in her pre-pregnancy jeans. I felt pretty shitty reading that. For the first few weeks, I felt like a slug. Nothing fit and and I felt frumpy in everything. This wasn’t such an issue since I really didn’t have anywhere to go and could get away with wearing yoga pants and tank tops all day. If I needed to wear actual pants, I wore my maternity jeans. When I returned to work, I bought a couple new pairs of jeans with a gift card my aunt gave me (thanks, tía Nelly).

Losing the weight I gained during pregnancy and the year before that hasn’t been a priority.

Five years ago, I worked really hard to get to my current weight. 165 was my driver’s license weight, that way low-balled number you put on the DMV forms. Sure, it was higher than what I was used to in recent years, but I was still 30 pounds away from where I had been at one point. It took me 5 months of meticulously tracking everything I ate to make sure I stayed within my points and running 4-5 times a week before I got to the 160s. I feel okay giving myself some leeway in the mad dash to lose the baby weight.

I had other priorities besides getting in to a certain pair of jeans — spending time with Xavi and Sean, keeping up my breastmilk supply and getting a little more sleep. I did miss running, but when I tried to start again I’d get discouraged by being so out of shape. I do want to get back to running and being more fit especially since Xavi started walking (4 days after his first birthday) and I need to keep up with him.

In August I began a free 12-week fitness class, Bruin Health Improvement Program’s (BHIP) On Ramp. The intro class is described as a “comprehensive strength and conditioning program.” 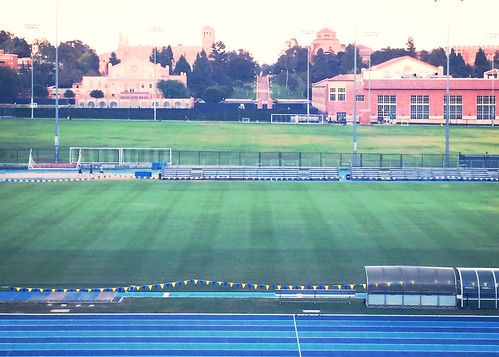 I wasn’t sure what to expect, but everyone I know who has taken the class highly recommends it. I would have signed up earlier, but was still pumping three times a day and wasn’t sure I’d have time to commit to an hour class three times a week. I still need to get work done.

So far, BHIP has been awesome. I’ve never stuck with a fitness class for more than 1 or 2 sessions. I preferred running on my own schedule. BHIP is different. Our class is tiny compared to the evening sessions. BHIP offers morning sessions too, but I’d rather sleep and have a little more Xavi time.

The workouts are crossfit style without the competitiveness or weird names. Since our class is usually 8 people, we get a lot of individual attention from the two instructors. They are also really motivating for those times when I just want to quit because it’s too damn hot out. It’s also nice to get out of my office and check out the campus I know and love. I’m the kind of person who eats lunch at my desk. 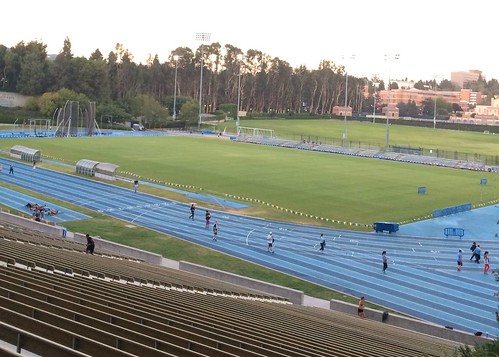 I like being back at the track where I used to do speed workouts for marathon training. I didn’t know much about BHIP then because I wasn’t eligible for the program. Now I’m the one in a corner doing workouts and watching the very fit athletes — Olympians, pros and D1 athletes — who are on the track or stairs for their midday workouts. I even spotted Kevin Durant out there once. 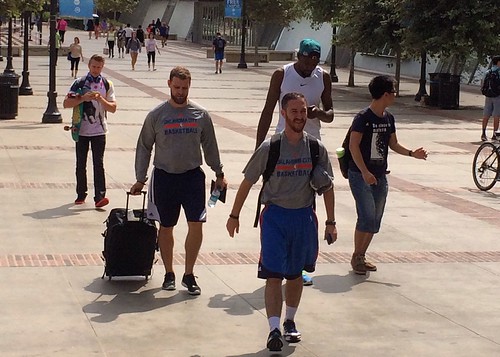 For the first week or so I was very sore and felt in over my head. Maybe I should have taken the BHIP 0.5 class focused on weight loss for more sedentary folks. Nevertheless, I’m starting to see results. I still can’t do a proper pushup, but I am getting stronger. I’ve also lost a little bit of weight even though I’m not concentrating on the nutrition aspect. It could just be water weight since I sweat a lot with outdoor midday workouts. The main physical differences are probably my awkward tan lines. 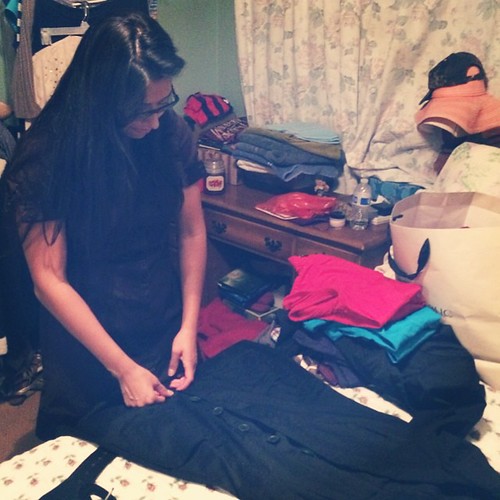 I’m still far from getting to pre-pregnancy clothes, but that’s okay. At least my sister Lori will get some use out of them. I had a moment when I saw her in one of the dresses I wore at my goal weight. I expected my old clothes to fit her a little loose, but the dress fit perfectly. I couldn’t believe I was that small. I forgot that one of my weightloss goals was to fit in to Lori’s clothes.

The experience was a little unsettling to see how far away I am from my goal weight. But that’s okay, it’s also motivation to know what sticking to a plan and moving more can do for my body and mind.