Well before I was pregnant, I thought about hair. In particular, mixed kid hair.

My hair is thin and stick straight. I’m lucky if it holds a curl for more than a few hours. I rarely do anything to it besides the occasional dye job. Styling is wash and go. I don’t bother with many products. My kid(s) wouldn’t have a different experience thanks to the other half of the genetic equation.

I thought I would have time to learn the ropes and figure out what to do. I could take my toddler to my cousin Patty’s house and ask her for lessons. Her grown children are also blaxican and over the years she’s learned to braid their hair. She even tried once on Xavi but he wouldn’t sit still too long.

I thought I got off easy when I found out we were having a boy. I wouldn’t need to worry too much about styling, the right products, moisturizing, conditioning, and the rest of the stuff whole natural hair blogs are made out of.

Xavi was born with a full head of hair. Everyone said it would fall out, but it never did. Instead the shiny black, straight hair covering his tiny newborn head grew and grew. It’s spiraled out into a thick set of curls that strangers think they can touch. [Grrr.] 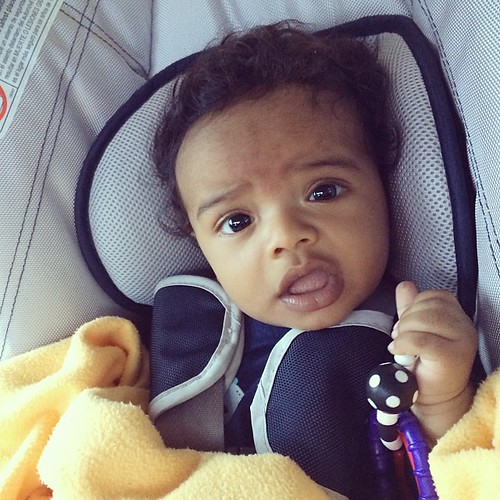 Well-meaning and curious family members also have stuff to say and ask. Have you cut his hair? No. [Aside: When I was a baby my Padrino José shaved my hair so that it would grow back thicker. Baby me would’ve been so jealous of Xavi’s curls. You know, if I cared about that sort of stuff.]

When are you going to cut it? Never! Okay, that’s not what I said, but I really have no plans to cut it. I love how big it’s gotten. However, if it starts bugging him or if he pulls at it a lot, we might have to change course. 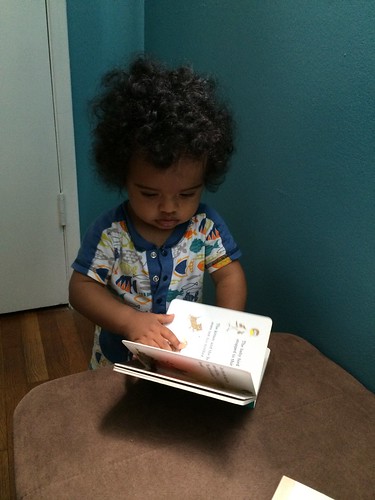 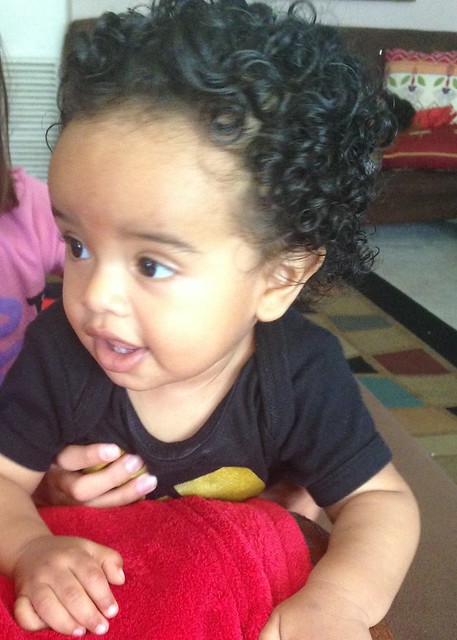 Sean does all of the work when it comes to Xavi’s hair. He gives Xavi his baths and washes his hair a couple of times a week. He combs through with an afro pick after spraying with detangler. Xavi is the youngest in the family, but has the most complicated hair routine.

Last month our neighbor filled in for Xavi’s usual babysitter. She tried Shea Moisture curl enhancer on Xavi’s hair and it looked great, just like his hair does when it’s wet. “You have to define each curl,” she told me in a text. Sean bought the product and he tried after Xavi’s next bath. We couldn’t get Xavi to sit still long enough. Oh well.