Earlier versions of this post were drafted in September-November 2016. Updated for clarity.

The day after Mamá Toni passed away almost two years ago my mom shared an idea with me.

“I was thinking that you, Sean and Xavi should move in to Mamá Toni’s old room.”

She had it all planned out and explained that what we would save on rent and childcare — Xavi would be cared for by a tag team of family members — could go towards a down payment for a house. And we could also have a second child. Possibly a girl.

I have to admit, in my grief, this idea didn’t seem half bad. Then I considered a move to Hacienda Heights would extend my commute at least an hour each way. I had never moved back home after going to college, and now I was considering doing so with a family. It was nuts.

When Sean arrived from his trip to New York to attend our friend Kevin’s funeral, I told him about the conversation. He laughed at the idea.

I never told him that for a moment it didn’t seem half bad.

Less than a year later, we had moved across the country so I could take a new job.

I thought about this a lot as I considered my immediate postpartum experience with Archie. 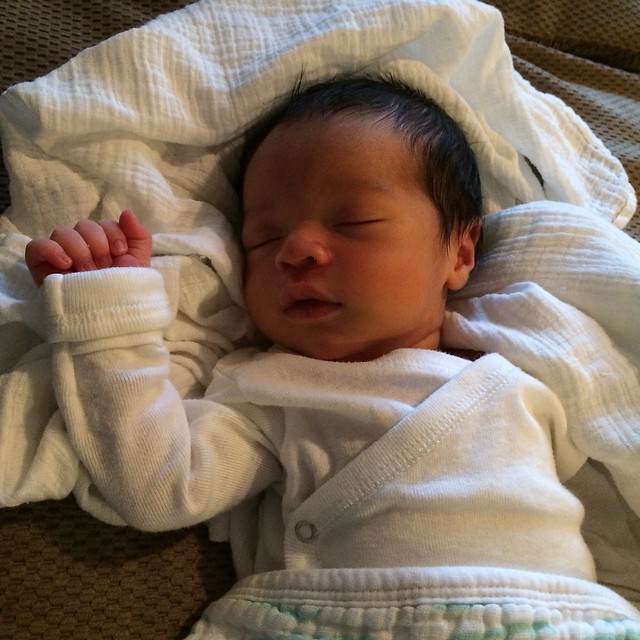 Archie was born on the afternoon of Monday, August 29th. On Tuesday evening, my parents arrived in Ithaca. My mom stayed for two weeks, my dad stayed for one. All my worries about how we would manage without our support network nearby subsided. While here, they took care of me, Sean, Xavi and Archie. We were spoiled with delicious food and time to rest while they took Xavi out for fun grandparent dates at the park, library and other places Xavi loves.

At the same time, our muscle memories kicked in and we got back to caring for a newborn. Friends have said it and now I believe it. The transition from one to two kids was definitely easier for us than going from none to one. Both boys were relatively easy newborns. The toughest aspect of newborn life with Xavi was learning to breastfeed and I avoided those issues with Archie by applying the lessons from my rough start with Xavi. It also helped that Archie was a great eater. Despite this we had more frequent appointments with the pediatrician to check weight since they considered him low for gestational age at birth. Through those and his output (read: diapers!), we’ve confirmed that he’s doing just fine.

Another big difference was my anxiety over going outside or nursing in public. With Xavi I was baffled about how this would work. I didn’t go to church for a month and our car trips were limited to appointments for doctor’s visits because he hated being in the car and LA traffic. This was a huge difference with Archie. On the Sunday after he was born, I was back in church. Nursing with a cover or without was no big deal. He did fine in the car for local trips and road-trips. I even was brave enough to fly cross country with both boys. Solo. I also helped that Archie was easygoing.

As expected, I was (am) tired. However, the sleep deprivation didn’t hit me as hard as the first time. This was likely because I was used to some sleep interruptions after Xavi and through waking up a lot during pregnancy.

The most challenging aspect was definitely parenting a newborn and trying to give Xavi the attention he needed. Xavi became more defiant and moody. I don’t know what part of it was being a three-year-old and what part was dealing with a tough transition. Despite being very excited to meet his little brother, he didn’t show much interest once Archie was home. He said things like, “Don’t hold baby Archie! [Anyone but mom] hold baby Archie.” And more than once he told Sean, “Tomorrow, we go to the hospital and take back baby Archie.” 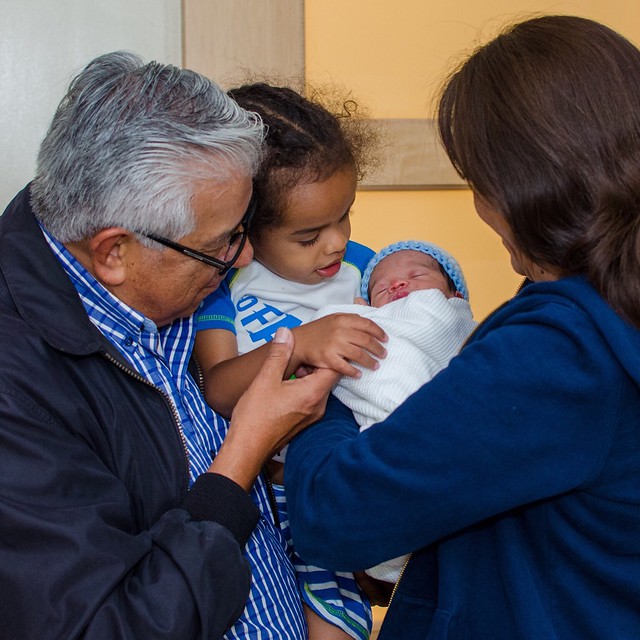 Naturally, I worried about what would happen when my parents returned to LA. How would we transition to handling both boys and still doing things like cooking and cleaning? During the two weeks my mom was in Ithaca we didn’t really worry about that stuff as she spoiled us.

Then she left and we adapted, but life didn’t return to a new normal for long.

Mom left on September 13th and less than 2 weeks later I was on a flight to LA with both boys. In the weeks before Archie was born Papá Chepe had battled lung infections and been hospitalized. When Archie was born Papá Chepe had already improved and gone home. However, a week later he was ill again. My parents were honest with me and let me know that I should come visit while I could, while Papá Chepe was still alert enough to recognize me. It was a tough decision to make. The cost was one issue. Time wasn’t as I had the time thanks to maternity leave. However, Sean didn’t have time to take off from work. If I went, I’d be going alone with Archie (definitely) and Xavi (quite likely). Was it even safe to travel with an infant who was only a few weeks old? I called our pediatrician’s office and cleared it with the nurse on the advice line. Air travel wasn’t ideal, but they made exceptions for extenuating circumstances. She just recommended I used common sense approaches to keeping him away from sick people.

And so I went because I knew I would deeply regret not saying goodbye if I had the chance.

On September 25th I flew out from JFK with Archie and Xavi. We spent the next ten days in Hacienda Heights at my mom’s house. Friends and family lent us carseats and a travel crib to make the visit easier. 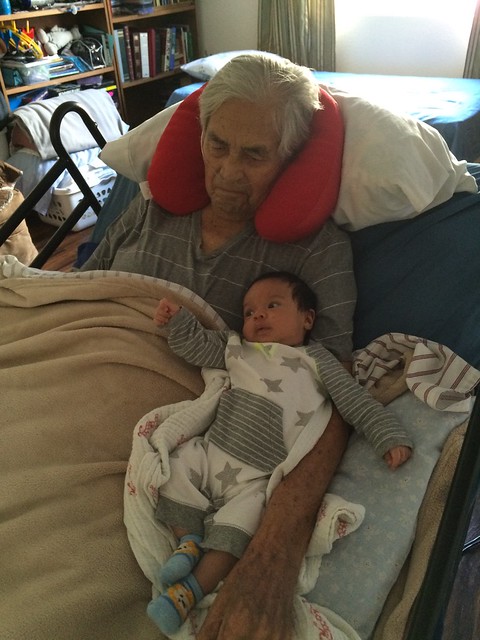 I was so happy to see Papá Chepe. By the time we visited his health had improved. He was alert, eating well and responsive. Papá Chepe got to meet Archie and see Xavi. During our visit I’d often put Archie in Papá Chepe’s bed so he could babysit. It was adorable, just as when he and Mamá Toni met a four-day old Xavi. Meanwhile, Xavi would play with the collection of toys Papá Chepe had available to help him regain skills he had lost after his stroke.

My parents doted on me and the boys. I was spoiled once again and didn’t have to cook or do other chores. I had plenty of immediate and extended family members around to hold Archie if I needed to eat or shower. My mom invited family over on a weekend to see us and it was like our old Sunday gatherings. And once again my parents took advantage of having Xavi in town to do fun grandparent dates like go swimming at a friend’s pool or visiting the train park.

I realized afterward that this was the closest I would get to a traditional postpartum cuarentena. I wasn’t going to move in to my parents’ home for that period or longer like my mom had proposed in those first few days after Mamá Toni passed away. That just wasn’t practical or possible for anyone involved. But the visits were more than enough.

For most of those first forty days I was staying under the same roof as my mom. I was mothered by by her and it was exactly what I needed to recover well and be the best mom I could be for my own children. And because of the special circumstances of Papá Chepe’s declining health I got to go home and see him again. It was a bittersweet blessing.

July 6th marks eight months since Papá Chepe’s passing. A few days ago, I had a dance party in the kitchen with Archie and Xavi. We danced to La Marcha de Zacatecas and I couldn’t help but miss all our dances.

Photos will be added later. Still working on that import. 😀