I wrote these thoughts yesterday morning. I now realize there’s a few similarities between what I wrote on Xavi’s due date and what I feel on Bubble’s due date.

I seem to have skipped the nesting phase. I didn’t have it big with Xavi either, but there was definitely more prep in readying our home.

I’m glad baby didn’t come over the weekend. Xavi’s babysitter was out of town. She’s our plan for when I go in to labor. We don’t have a backup. Unless, of course, baby comes once my parents arrive.

My mom and dad will be here in a week!

I went on maternity leave just as the fall semester was starting. The transition from summer university life to fall has always rankled me and I’m not sad to skip it.

Despite being on leave I’m still doing work from home. A busy summer meant getting work done but not planning as much as I needed to for leave.

I have a prenatal massage today. I double checked with the spa to make sure that I wouldn’t be charged for canceling late if I do go in to labor.

Currently reading A House of My Own: Stories from My Life by Sandra Cisneros and it’s amazing. I’ve already cried about three times. She feels like my wise tía and such a poet in the sense that she writes what others feel.

Part of what bummed me out about Xavi being a week late was waiting through important days. I thought it would be SO cool if he was born on Papá Chepe’s birthday. As the patriarch of a big family he had no birthday twins and it was time for at least one.

Lots of people ask me if Xavi is excited about becoming a big brother. Before a few days ago, I’d say I didn’t really know. And if he was excited, it wasn’t expressed the way he typically shows (jumping, eyes lighting up in that “oh, boy, oh boy!” sense).

But I think the efforts we’ve been making have helped. He has books about becoming a big brother and having a baby in the home. He’s seen the apartment start to be populated with baby things. On Saturday, he attended a “siblings are special” class at the hospital. We pushed it by scheduling the class just a few days before my due date, but the previous date didn’t work for me due to work. Xavi got to tour the labor and delivery ward again (he went with us the first time we toured), saw a real newborn in the nursery, made a birthday poster for baby, and got to practice helping change a baby’s diaper. 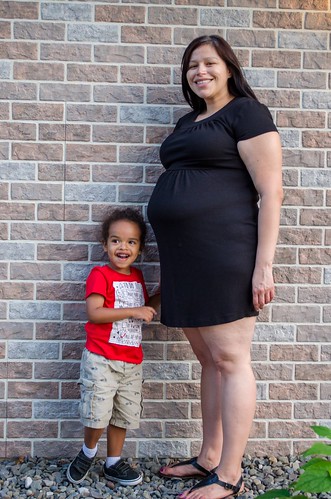 During his recent speech therapy appointment his therapist brought a baby doll. She told Sean that Xavi did really well feeding the baby, brushing hair, hugging and singing baby songs. He was very sweet and gentle.

He’s also started doing a baby act. He does a “wah waaah” cry if we mention a baby and wants to be held in a cradle position. I ask him what baby needs. Diaper change? Feeding? Cuddles? A nap? And he just laughs.

And at a recent baby shower, he gave a 2 month old baby a gentle hug unprompted.

Yesterday, Sean and Xavi went to pick me up at the spa. Xavi asked Sean if they were going to the hospital to get me and baby.

He still doesn’t say, “yes” if you ask if he’s excited. But I think he is.

As for how I’m feeling? No signs of labor starting — that’s what people really want to know. And okay, but uncomfortable as one would expect a woman to feel late in pregnancy. I took long walks while waiting for Xavi but won’t be doing that because it’s hot and humid. Plus, I’m just not that comfortable.

3 thoughts on “Forty plus one”