I figure before the year ends I need to at least wrap up the last few months.

November seemed to go by quickly thanks to travel in the second half. I attended the American Indian Science and Engineering Society national conference in Phoenix for work. My job includes some recruitment for graduate and undergraduate admissions and student group advising. This trip combined those aspects. 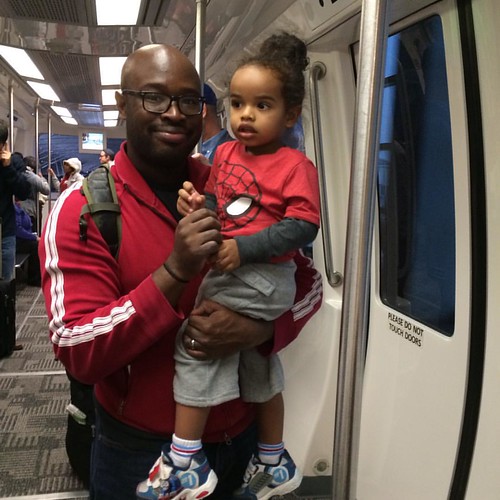 When I got the travel schedule in the summer I immediately knew I wanted to make this an extended trip since the conference ended a few days before Thanksgiving. I worked it out so Sean and Xavi would come to Phoenix with me and we’d spend the days after the conference in LA. We got our first taste of long travel days from Ithaca to LA. Pro: Xavi loved the Detroit airport in-terminal tram (because trains). Con: including driving to/from the airports the trip from LA to Ithaca was 13 hours. 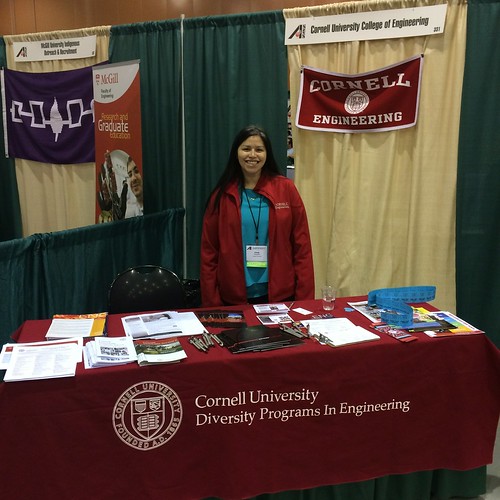 The conference itself was a great learning experience and I got to know some of our students better. The university sent 6 students to attend and/or present their research. Personally, it was the first time American Indians have asked me if I was a American Indian or what tribe I was from. It was weird saying “no, I’m not Indian, I’m Mexican,” because the only difference is the border as I’m indigenous to this continent too.

We arrived in Phoenix on Wednesday the 18th. My parents arrived the next morning. They couldn’t wait until we made it to LA after the conference. They did fun stuff like going to the children’s museum a few blocks away while I worked. 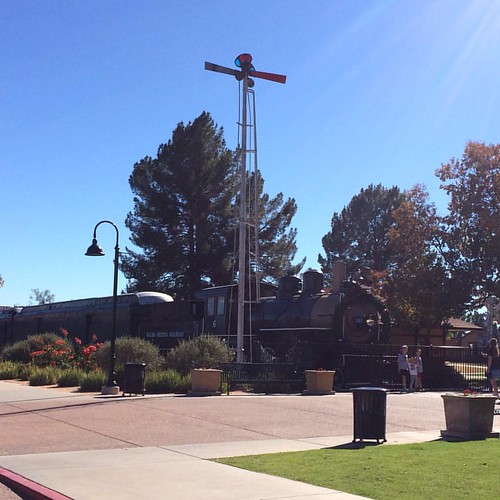 On a free Saturday morning I joined them on a short trip to Scottsdale and the McCormick-Stillman Railroad Park. If you’re ever in the area, I highly recommend visiting not only because it was affordable and not too crowded. Xavi loved it of course because he got to ride big and little trains. I also found it cool to walk through a Pullman car that had once carried U.S. presidents in the first half of the 20th century. I also was a fan of the model railroads. They reminded me of our neighbor, Mr. Dale, who had his own model town and railroad in the garage. These model trains were on a different scale though and included interactive options for kids (e.g., a drive-in theater where you’re the one on the screen). We got there in the middle of their Christmas prep which I imagine must look pretty neat all lit up.

The conference ended on Saturday night and we returned to LA on Sunday morning. 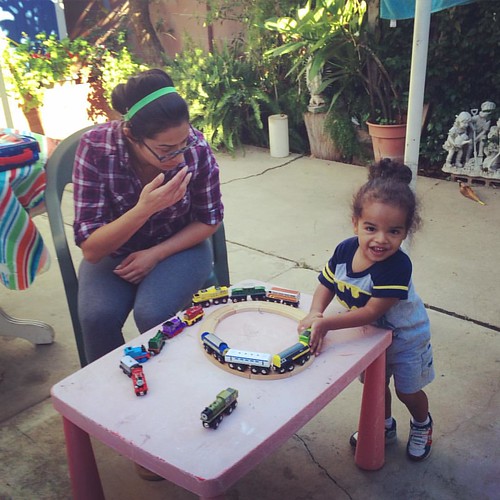 It was 80+ degrees in LA, warmer than Phoenix, and felt so good. The first afternoon we were home was full of several immediate and extended family members coming by to visit with Papá Chepe as usual. Xavi was spoiled by plenty of time with his grandparents and aunts and uncles.

In hindsight I feel like we should’ve done more during our trip but it was nice to just relax. Highlights:

Xavi doing chores like helping to pick up the leaves and walk Daisy and VR. 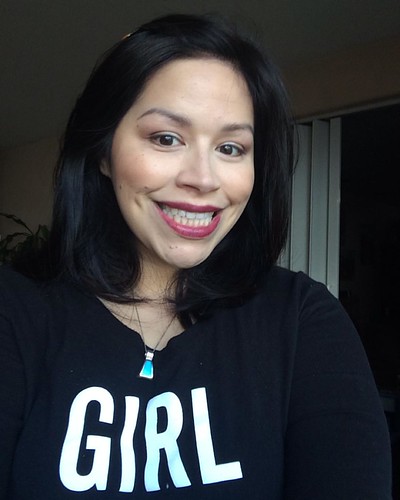 Getting pampered by my sister Lori. On Wednesday she took me to her stylist and I got a much needed haircut and dye job. The next day she did my makeup and we had a mini lesson on the basics. I typically just put moisturizer on my face. I relied on Lori to do my makeup for special events. Now that I’m across the country that’s not an option so Lori bought me a bunch of new makeup and gave me a mini lesson. I definitely felt cute for Thanksgiving with my hair and makeup done. 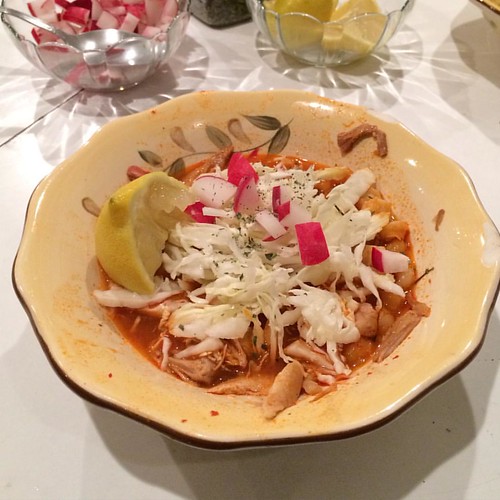 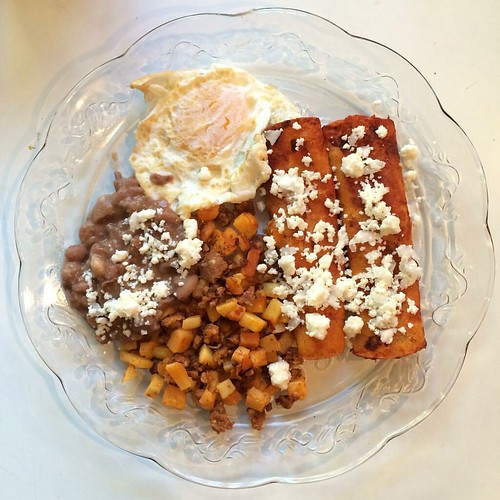 The food! We were spoiled by amazing homemade Mexican food like enchiladas, breakfast burritos from our favorite spot and pozole. Of course we had the requisite In-n-Out trip.

Meeting baby Alexander. Some close friends, Cain and Jessica, came by the house and I got to meet their newborn son, Alexander. I tried hard not to sing his name like in Hamilton. I’m still obsessed. It was also nice to see their older kids, Becka and Jordan. Other than seeing Cain and Jessica I didn’t see other LA friends (maybe for a longer trip). Sean did visit his former coworkers. 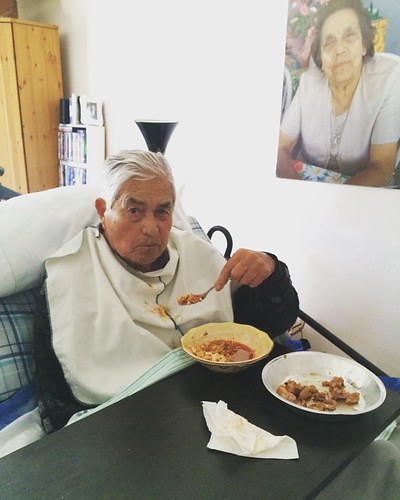 Seeing Papá Chepe. I see him on FaceTime calls but with his speech issues communication is easier in person.

We visited my mom’s classroom. Her students have heard so much about Xavi that when they found out he’d be visiting they asked if he could come to their Thanksgiving lunch. The high school students warmly welcomed Xavi and one boy even drew him a picture of a t-rex. 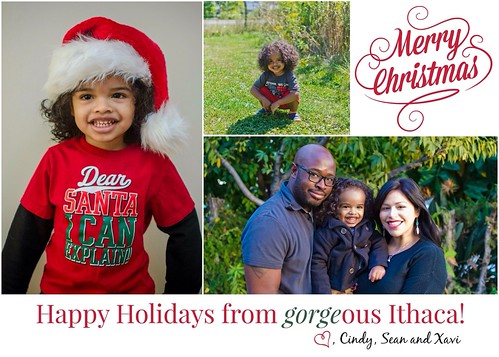 Thanksgiving! I don’t remember much now aside from being very full and seeing lots of aunts, uncles and cousins. We also took the photo we used for our holiday card.

This month seemed to zoom by too. After returning from a conference and vacation I had a lot of catch up to close out the semester. [I still feel weird using semester rather than quarter.] We also had several holiday parties at work. I’m used to a small gathering at my supervisor’s house. This year we had: graduate student holiday party hosted by our office (Xavi and Sean came); dean’s holiday party for staff in the college; office holiday party hosted by the professor we work with (Xavi and Sean came too); and student service staff party at a local restaurant. I thought it would feel like a lot or be a drag, but it was actually a lot of fun. Xavi also made us proud by dancing to Bel Biv Devoe’s “Poison” and ATCQ’s “Bonita Applebaum.” He was just happy that there was plenty of cheese and brownies. 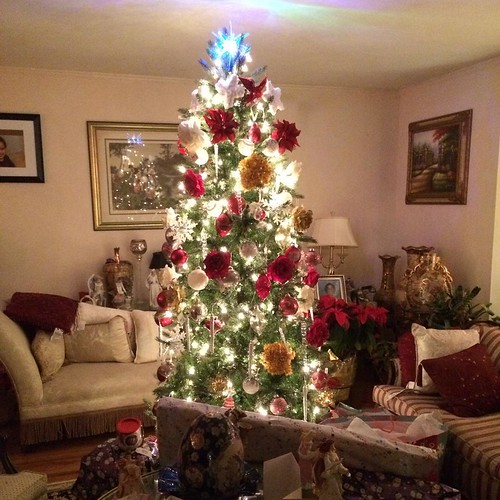 Christmas was pretty low key. I’ve never been one to decorate my own place much and since moving had cut down on the few decorations I did have. We didn’t even buy a tree. Nevertheless, Xavi still got to see lights and a tree crowded with presents at my in-laws. My mother-in-law went all out with the decorations given that this was the first time her grandson spent Christmas in NY. He was spoiled by presents and still hasn’t taken half of them out of the box. I felt spoiled by the highs in the 60-70s. I know lots of people said this didn’t feel like winter of the Christmas they were used to, but I felt quite at home and appreciative that it hasn’t been oppressively cold yet. 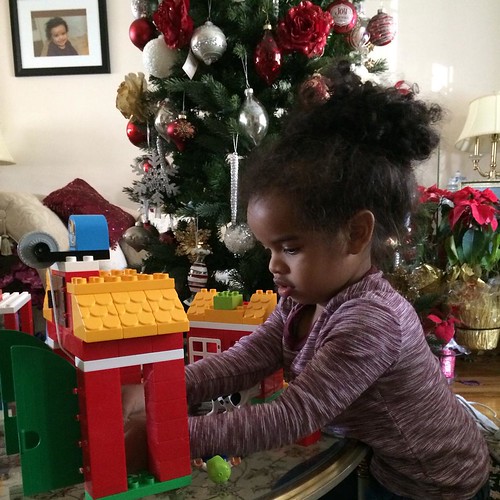 The big hits were Matchbox Cars, a Duplo farm set (my feet are already crying), and a set of books featuring Mickey & Friends. All the gifts and our bags barely fit in our car. 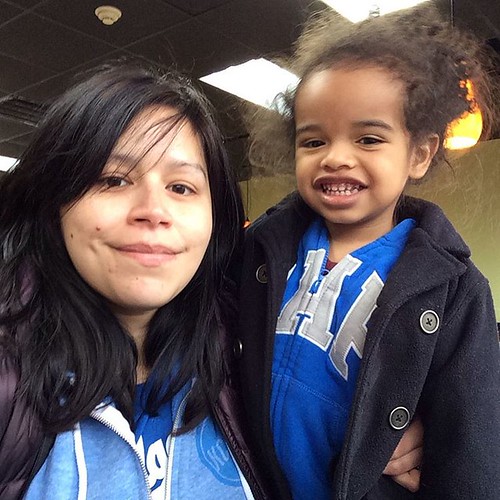 I have Christmas through New Year’s off from work, but we returned on Monday for Xavi’s speech therapy on Tuesday morning. . The drive was the longest we’ve experienced since Xavi got sick twice. He really doesn’t look sick, does he? Must remember to keep a roll of paper towels in the car.

NYE is just as quiet as it was last year. This year we have the excuse that we don’t know too many people in Ithaca and don’t have a trusted babysitter yet. It’s fine with us, I needed to catch up on some blogging anyway.