When I was on maternity leave one of my favorite things to do was take Xavi for walks around 5 pm. We’d wander the neighborhood and then meet up with Sean on his walk home from the train station.

I’d text him: I’m the one walking the stroller.

When we encountered each other on the sidewalk, he’d smile and say “Hi family.”

Once I returned to work, I stopped taking those short walks since it was often feeding time when I got home. Plus, by the time I got Xavi ready to go out, it’d be dark and cool. I missed it.

The week before Christmas was different. I got home a little earlier and it was hardly even cold out. On that Tuesday, I put Xavi in a sweater and texted Sean about his expected arrival at the train station. Since he would be 20 minutes later than usual, I decided to meander through the neighborhood checking out Christmas lights.

With Xavi in the Baby Bjorn, we walked up and down the block and surrounding streets. I pointed out lawn decorations like inflatable Santas, reindeer and snowmen. I tried to get Xavi interested in the lights, but he didn’t seem impressed probably because he couldn’t touch them or put them in his mouth. Two streets over, we stood on the sidewalk in front of one of the more elaborately decorated homes on the block. I showed Xavi the mini Christmas trees lighting the walkway and the other decorations.

Behind us, an older man and his granddaughter parked on the street and got out of their car.

“They’re nice! I wanted to show him the lights in the neighborhood.” I responded.

The little girl just looked at us, but the man came closer and began asking about Xavi.

“Four and half months.”

He talked to Xavi and made him giggle.

“Yes,” I replied feeling uneasy and wondering all sorts of things. “I gotta get going. Merry Christmas!”

I walked away and toward the usual meeting-up place with Sean thinking about the comment and what I had read from other women who have mixed race kids.

A week later, I got the same question. This time, Xavi was asleep in the stroller and we were out for a late morning walk. Two elderly women stepped to the side to let me through over a busted up section of the sidewalk.

“What do we have here?” the first one said in that high-pitched ‘it’s a baby!!!’ voice.

I stopped so she could look at Xavi. They started asking questions and commenting on his appearance. How old? His name? Oh, he’s sleeping. Oh my, so much hair! He’s adorable. As they spoke, Xavi stirred and opened up his eyes.

Oh no, they’re gonna wake him up, I thought.

“Yes,” I said while my face screamed “of course he’s mine, you nosy dimwit!” I imagine my face gave away my feelings.

“Oh, he does look like mom,” she said to her friend.

“Have a good day,” I said ready to keep moving. 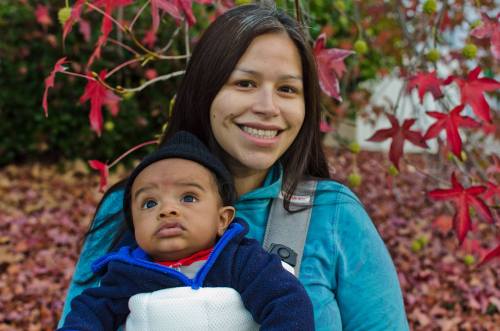 I walked the rest of the way trying to figure out why I’d been asked the question twice. There were two obvious reasons:

1. They think I’m the nanny because I’m Chicana and there are lot of families in the area who employ Latina caretakers for their kids — self included. If you go to the local park, most of the adults there on a late weekday morning will be Latinas in their 30s and 40s looking after mainly white toddlers and babies. Plus, the neighborhood I was walking through is wealthy and predominantly white. The Latinos I see there are often working in construction, landscaping and childcare. (I live a 10 minute walk away, but am used to running/walking through the area because I get in some hill work. Definitely not rich.)

2. They don’t think Xavi looks like me because he’s mixed race and thus has browner skin and curly hair.

The second explanation seems more plausible in both instances. In the first, I was carrying Xavi in the Baby Bjorn and in my limited experience baby carrying seems like the domain of a mother or father. It was also evening. Second, one woman even brought up the resemblance seemingly to put me at ease and address the faux pas of asking the question in the first place.

I know mothers and fathers of mixed race children get this question. I’ve heard of moms making t-shirts saying “I’m not the nanny” and stories from parents who get scolded by judgmental strangers for speaking Spanish or another native language with kids at the playground in a “I don’t think the child’s parents would appreciate that” sense. I even thought I’d hear the questions or get the looks at one point, but didn’t think it would happen just five months in to motherhood.

I love that Xavi is a mix of our racial and ethnic backgrounds. He’ll grow up knowing he has roots in Mexico and Jamaica, southern California and New York. He’ll know rancheras and reggae, curry goat and birria de chivo, the beaches of Montego Bay and Mazatlán. He’ll cheer for Jamaican sprinters in the summer Olympics and el Tricolor in the World Cup. He’ll hear the lilting Jamaican accent of his grandparents Kenton and Eula and Spanish and Spanglish from his abuelitos Luz and Carlos. He may even roll his eyes when I say that he is Jamexican finding it corny and preferring Blaxican.

I hope he never feels the pit in his stomach when someone questions if I’m his mom or Sean’s his dad because we’re a lighter or darker shade of brown.

And if he does, I hope that he brings his grade A side-eye and WTF face along with a polite, “Yes, she’s my mom…” followed by an under the breath, “y que te importa?”