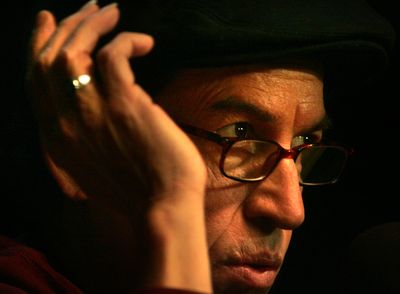 January 29, 1953
Louie Pérez, of Los Lobos and Latin Playboys, was born in Los Angeles and grew up in East LA

I’ve been to many concerts over the last 15 years. Few moments stand out from the others. One of those was the 2005 UCLA Royce Hall concert featuring Los Lobos and Perla Batalla. I went to that show alone as I found about it last minute and just had a chance to buy a discounted student ticket. Overall, the show was pretty amazing. I wished dad and Danny could have been there too. They would’ve loved it. I’m glad I wrote about that show while the memories were still fresh:

Last night, Los Lobos primarily stayed away from their blues-rock repertoire and focused on classic Mexican tunes. They played boleros like “Gema” and “Sabor a Mí,” as well as son jarocho, rancheras (“Cielito Lindo” and “La Pistola y el Corazón”), cumbias, blues-rock (“Saint Behind the Glass” and “Kiko and the Lavender Moon”), and songs from other Latin American countries (“Guantanamera” and “El Cuchipé”).

At one point, all of Los Lobos sat on stools in a half-circle. They recounted a story about playing the same tunes at parties for friends and families when they were just starting out as a band. At that moment, I thought of you [Dad] and was reminded of the dozens of times throughout my childhood when you did the same thing at a party or around the campfire.

That performance definitely made me emotional. I probably cried as Louie Pérez sang “Saint Behind the Glass,” my favorite Los Lobos song. There’s something magical about the opening jarana and the soothing nature of Pérez’s voice. In this live version, co-songwriter David Hidalgo sings along. I like it because Pérez explains the song’s biographical roots. It hits home, especially since my dad grew up in the same area. Some of the places he drives by in this tour of East LA are quite familiar. [Listen to the original version of “Saint Behind the Glass” with only Pérez’s vocals here, right-click to download.]

In an interview with Six String Soul, Pérez describes the songwriting relationship with David Hidalgo that has evolved since they were teens: “Ideally I would sit with David and work lyrics and music together. But since time is so much a premium for us these days, we’ve chosen to split the chores between us. But to say that David is the music and I’m the lyrics would hugely discount us. We’re songwriters, top to bottom.” Pérez goes on to say that the starting point for lyrical inspiration comes from his East La roots.

Today marks Pérez’s 59th birthday. I hope he has many more birthdays and continues to write meaningful songs for a band that’s way more than just another band from East LA.

To celebrate, listen to your favorite Los Lobos album. Might I suggest Kiko and the Lavender Moon?