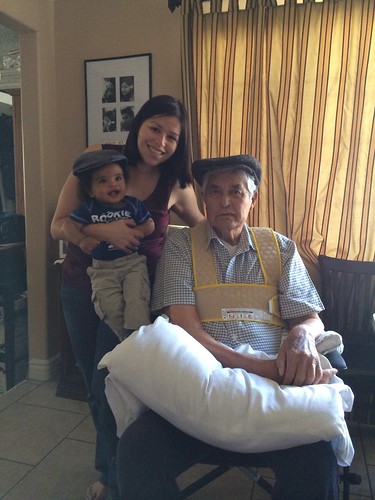 Less than a week after Papá Chepe’s stroke, I sat with mom in the kitchen, in the same chair grandpa typically sat in for his meals.

“What’s the likelihood he’ll be leaving the hospital any time soon?” I asked tentatively.

Mom sighed and shrugged her shoulders. Papá Chepe was still in the ICU. She listed some of the key reasons why he’d be under professional medical care for the foreseeable future. There was still fluid in his lungs, his blood pressure still got dangerously high and due to the stroke he could not move his tongue nor right side of his body. Thus, all nutrition was taken in via IV.

A recovery at that point seemed like a long shot. Coming home? That was a dream.

Over the next seven weeks, Papá Chepe stayed in the hospital. He was moved from ICU to the second floor for less critical patients. A week or so later, he was moved to a larger hospital a couple of miles away, but still in Whittier. When Sean and I visited Hospital 2 we were glad the lady at the check-in desk gave us a map. I surely would have gotten lost otherwise. Family members continued to take turns staying overnight and those who lived out of state flew or drove in to visit. There were less people in the waiting room, but it still felt like a mini-reunion at times.

On March 7th dad — self-appointed update sharer — sent a message starting with GOOD NEWS!! . The extra exclamation mark and all caps were warranted because after a meeting with hospice care and a home health care service, the extended family had unanimously decided to bring Papá Chepe home.

He ended his message with a request for assistance as the family readied our home for Papá Chepe.

I asked dad how soon the move would be. He made it seem like Wednesday of the next week, Monday at the earliest. That weekend several family members gathered to start making my parent’s home more amenable for Papá Chepe’s needs. A dozen people worked from morning until night to get everything ready. The room that my grandparents shared would now be only for Papá Chepe and Mamá Toni and her bed had been moved to my brothers’ old room.

On Monday afternoon the bed and supplies were delivered. At 3:00 an ambulance transported Papá Chepe from Hospital 2 in Whittier back to the home he hadn’t been in since January 21st.

I wasn’t there when the medics wheeled Papá Chepe in on the stretcher. Instead, I saw the homecoming via Adrian’s phone. He took a short video of the dogs, VR and Daisy, circling around the living room. Daisy barked, which she always does with strangers and even family members. She’s funny like that. VR was quiet, but he knew something was happening. In the video, Adrian holds his phone in one hand and picks up VR with his free arm so he can Papá Chepe on the stretcher. Adrian said he was scared by the stretcher.

Over the next few days, Papá Chepe’s team of “nurses” — also known as half a dozen of my aunts, uncles and cousins — signed up for day and night shifts and received a crash course from the professionals on the basics.

I considered going that Monday, but mom said it would be better to go the next day.

Tuesday started off bad for me. I drove to work to save time, but was sent to a parking structure on the other side of campus and then stupidly locked my keys in the car. Fortunately, I’d taken out my phone, pump and wallet before I closed the door. I found out a few hours later that my roadside assistance had expired (confusing since I just used it in July). Sean helped me out and agreed to leave work early, go home and pick up the spare set of keys and take the bus to campus. I left earlier than planned for my hair appointment and got turned around in my own neighborhood thanks to some construction roadblocks. Still, I got to my appointment on time, got my hair colored for free (!) and was feeling much better when I got home. Sean and Xavi were ready to head out and visit Papá Chepe.

Any feeling I had of having a no good, very bad, horrible day changed as soon as I arrived at the house and brought Xavi in to see his great grandpa.

Papá Chepe seemed a little tired, but was glad to see us. He looked Xavi over, seemingly surprised by how much he had grown in just a couple of months. I was just glad to see him home even though it was a much different home. 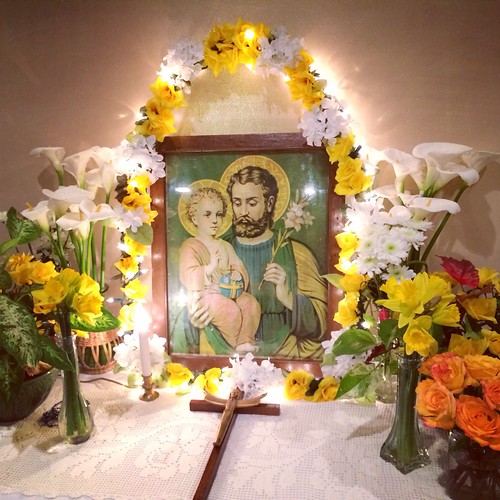 Papá Chepe has been home for over six weeks. On the 19th, over two dozen family members crammed in to the living room and kitchen to celebrate a special Mass in honor of St. Joseph’s day, or el día del santo de Papá Chepe since he shares his name with the saint. Also, the Ureño family has always honored St. Joseph and a frame with his image has been passed down for a couple of generations. Over the past few years, we’ve celebrated the day with a Mass and a fundraiser for HOCATI, the Tijuana orphanage that Papá Chepe and Mamá Toni donated their home to 4 years ago.

I couldn’t help but think that in January I was sending text messages to my parents and brothers about how I had recently learned that St. Joseph was the patron saint of a happy death because he died with Mary and Jesus by his side. This time, I was thinking of how lucky we were to still have Papá Chepe and was even more amazed that he was sitting up in a wheelchair. 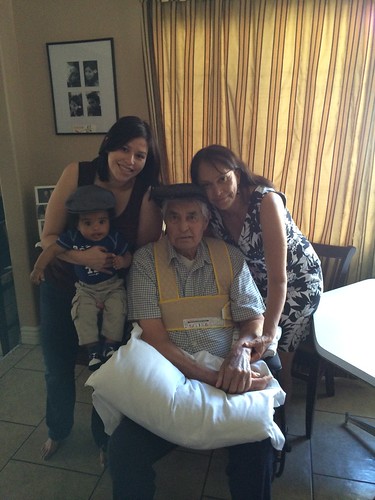 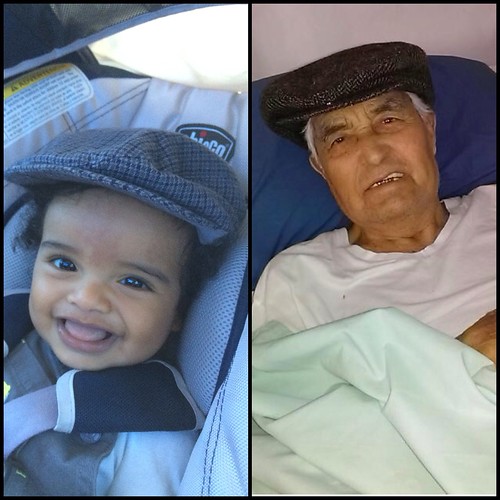 There’s one of him outside with sunglasses and a paperboy cap. Mamá Toni is at his side. There’s another with Papá Chepe in the wheelchair taking VR and Daisy out for a walk. A third shows him enjoying the warmer spring days in the backyard he used to meticulously tend. 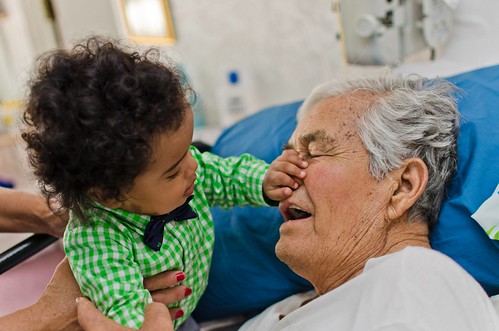 My favorite, naturally, is any photo of Papá Chepe and Xavi. Every time I see those photos, I’m so thankful that he’s home, that our family can care for him there and that each day he’s getting a little better.

Once again, we are so thankful for the many prayers, good wishes and thoughts.