It’s been a good year. Well, better than good. I’m loathe to exaggerate, but I’d say the year I became a mother has been the best. It’s the year love, family, blessings, husband, partner, work and being grateful took on more complete meanings. It’s the year I met Xavier.

I look forward to more tender and silly Sean and Xavi moments. 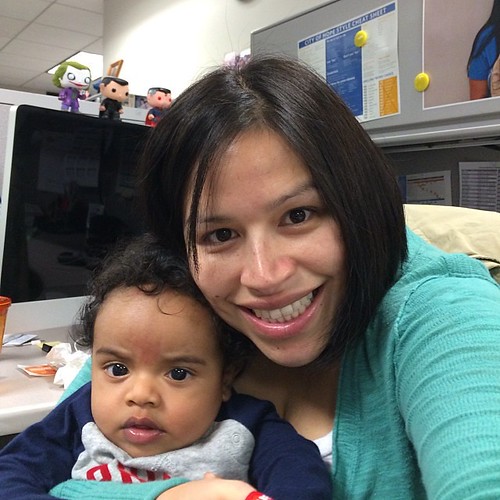 When I was a kid my parents always went all out for Christmas. As a result, I have dozens of memories of large family gatherings, visits from Santa, oohing at the nativity scene and Santa’s village my parents painted and set up (and tried not to break), singing Las Posadas and eating more tamales than one can count.

As an adult I became pretty lazy about the holidays. Some of it had to do with associating the days on/after Christmas with the passing of my grandparents. And some was just being burnt out from finals and a busy fall quarter.

Now that I have my own little family, I realize I need to step up my game. I want Xavi to look forward to singing carols in English and Spanish while Grandpa Charlie strums the guitar.

I want him to be excited when Santa Claus shows up to the Christmas Eve party.

I want to see his eyes light up with awe and elaborate light displays and rush to play with the new toys Sean and I picked out.

I can’t wait for those moments, but for now Christmas is just awesome even if he almost sleeps through Santa’s visit.

Merry Christmas from our family!

Three weeks after Xavi was born, we took him to my cousin Bea’s birthday party in Whittier. I was tired and frazzled about what to wear, but I wanted to get out, see my family and give them a chance to meet the little guy. I fed Xavi and maybe 30-40 minutes later, we got going. We instantly hit traffic on the eastbound 10 freeway. Xavi got upset and hungry and started crying. No amount of soothing or Happiest Baby on the Block trick would work. Xavi was hungry. I was stressed and so was Sean. I didn’t know if we’d make it to Whittier. After about 10 miles and barely getting to Downtown LA — less than half way to our destination — I told Sean that we should exit in East LA, find a place to park and I’d feed him until he calmed down. He agreed and followed my directions to my aunts’ apartment complex. Four of my aunts and their families all live in the same building. On a Saturday afternoon, I figured someone had to be home. If no one was home, I’d hang out in their driveway and feed Xavi there.

A few minutes later, we parked and walked up to apartment 1. Tía Angeles answered the door to find me with a screaming newborn and stressed husband. In my pocha Spanish I explained that we were on our way to Whittier for the birthday party, but had to stop because the baby was hungry and really upset. She rushed me in to one of the bedrooms so I could nurse the little guy. Xavi instantly calmed down and after nursing fell asleep. I thanked tía Angeles and greeted my other aunts, Chabelita and Isabel, before leaving to our final destination, Whittier.

The rest of the car ride was uneventful. Traffic cleared up on the 60 and Xavi, now with a full tummy and moving car, fell asleep. I’d read about people going for a drive to calm down screaming babies, but didn’t know the car ride itself could be the cause of the screaming. Previous car rides had been short and without much traffic so Xavi remained relatively calm. Obviously, I had a lot to learn.

I’ve always been annoyed by LA traffic. It’s different now. Annoyed isn’t strong enough to describe my intense dislike. I’ve noticed this with other things too. Weekends are better now that I know they’re my two full days with my little family. There are more and bigger cracks in the sidewalk now that I’m pushing a stroller over them. Laughter — Xavi’s, especially — is more contagious. Love and appreciation for my husband and family has grown exponentially. Sleep is more appreciated.

Life is different with Xavi. I like that — as long as he’s not screaming in standstill LA traffic, but I have a feeling that’ll happen again. And again.